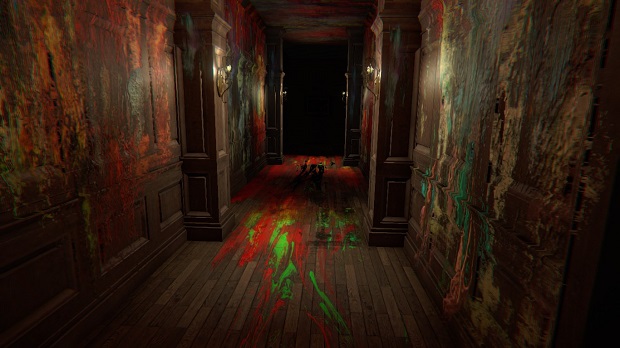 As a creative, I was instantly fascinated by the premise of Layers of Fear. It’s easy to empathize with a painter on a quest to complete his magnum opus; we all have that one project we want so badly to get right. This game goes beyond themes of creative block and perfectionism, though; it touches on topics such as marriage and children, grief in the wake of a tragedy, alcoholism, mental illness, and other struggles that plague this little family.

I watched gameplay of this title when it was in Early Access, so I can tell what bits of the story got edited out, but there’s one thing I am glad made the final cut: not giving the characters names. Any notes or newspaper clippings have the names scratched out, and even the few photographs you find are damaged or scribbled over in a way that hides the faces. This decision allows the player freedom to envision the characters’ identities and, in a way, mold the story as they wish. The open-ended nature of this game is a major aspect that I will address later in this review.

While the setting is gorgeous and definitely not contemporary, it’s hard to determine what era Layers of Fear takes place in. The description says the game was inspired by masterpiece paintings from centuries past, along with architecture and decor from the 19th century, which seems to fit. The main character’s paintings are done in a classical style, and his bedroom has a gramophone in it which plays a snippet of a song called “Stumbling” from the 1920s. There are no cell phones, computers, or technological toys laying around. Instead, he and his wife amuse themselves with their artistic hobbies, along with the occasional game of checkers or dominoes, and their daughter’s room is filled with alphabet blocks and dolls.

Whether it’s passing handwritten notes or receiving typed ones through the mail, much of the correspondence in this game is done through letters. However, many of the notes and some of the dialogue contains cursing, something that seems more modern and casual than the suggested time period. Also, while digging around in desk drawers, you can find a “Save the Date” card for the main character’s wedding, a concept that did not arise until the mid-2000s.

In spite of these small anachronisms, Layers of Fear fills the family’s mansion with the trappings of their time well. The luxurious pieces of furniture, the vintage pamphlets, and even the towels and hand mirror in the bathroom combine to tell a story. In this way, it’s almost like an eerie twist on games like Gone Home.

All or most of the key items in the story can be found in the very beginning, before you start work on the portrait. This is why Layers of Fear is a game where you need to pay close attention and search each environment as thoroughly as you can. There are tons of notes scattered around that provide details of the story, and often the act of turning around or moving down a hallway will trigger a change in a painting or make writing appear on the wall. If you aren’t observant, you could miss out on something.

Perusing the closets, drawers, and cabinets is not only beneficial in adding content to the story, but it really does tie everything together. Items that seemed like only decoration will gain significance, and connections can be drawn that make sense of the game’s events. Since there are very few sequences where you’re being pursued by an entity that can harm you (the best way I can word it without spoiling anything), you can afford to spend time looking around.

Some rooms look perfectly normal, while others are melting or falling apart.

That doesn’t mean the atmosphere isn’t tense. Describing this game as psychedelic or psychological horror is highly accurate. There are a few jumpscares thrown in for good measure, but the main way Layers of Fear rattles you is the series of hallucinations you stumble through. Baby dolls come alive, telephones float through the air, and you start walking in circles through the exact same hallway to witness it becoming more decrepit. Sometimes rooms only startle you with unnerving noises or kaleidoscopic visuals, but even that is enough to make you let out an involuntary gasp. There were many moments I had to pause and catch my breath.

All these signs point to a man going insane. While the notes you find share a lot of helpful information, they don’t explain everything. Is the main character truly schizophrenic, or is he just severely depressed and suffering from the effects of stress due to recent events? Is there really a rat infestation in the house? What happened to the daughter? The story surrounding the mother is mostly clear, but anything relating to their child is fairly vague.

I liked this aspect of Layers of Fear, though. It was absorbing and gave me plenty to ponder on as I wandered from room to room. Theories would surface, then minutes later I’d find another note that gave me a new perspective. Definitive answers are hard to come by, and the few you do find are quite sad.

Anticipation builds as you work to discover what he’s been so devoted to painting.

The ending is impeccable, somehow both heartbreaking and hopeful at the same time. Because of the way it unfolds, it’s something else that is up to your own interpretation. As the details started to settle in my mind like snow, part of me wanted to ruminate on everything a while, and the other part wanted to immediately start the game again, convinced there must be things I overlooked while exploring.

Contrary to how this review may sound, Layers of Fear is not just a scary walking simulator. There are a few puzzles sprinkled throughout the game, but they’re all pretty simple to figure out. Usually they just involve finding the right numbers or seeking out items in a certain area. I had one or two moments of frustration, but they were short-lived because the solutions made sense. Every puzzle tied back into the story somehow; there was nothing random about them.

Any gripes I have about this game are very small. While trying to solve one of the puzzles, I ended up stuck inside a counter and had to start the section over, and there was one note that seemed to be unintentionally repeated, as it made more sense in one context than the other. The main problem I had was feeling like objects didn’t have any weight. Items I picked up would spin around in my hands easily, and clicking on cabinets would make them fly open only to slam shut a few seconds later. The same thing happened with a handful of doors, which was minorly annoying.

What used to be an average office has suddenly been transformed by a troubled mind.

The positives decidedly outweigh the negatives, though. The artwork is absolutely stunning, no matter what state the house is in. It’s not just the quality, but the composition. I found myself taking dozens of screenshots while playing because everything was so interesting and aesthetically pleasing. The house is contorted in tons of different ways; it’s a feast for the imagination, and it definitely makes you sit up and pay attention.

Layers of Fear isn’t really graphic or gory, but in its own way it will haunt you. There is enough horror for horror game fans, but it isn’t too frightening for those who typically shy away from scary games. If you’re even the slightest bit intrigued, I highly recommend that you give it a try. It’s an experience worth having and one that I’m sure to repeat.

Layers of Fear is an incredible, mind-bending horror game. The gorgeous environments are both detailed and terrifying, and the story will captivate you as you work to unravel all the threads. What it lacks in polish it makes up for in how obsessed you’ll become with finishing the masterpiece.

Sarah Marchant is an office admin for a nerdy t-shirt company. She has a soft spot for indie games, a passion for story-driven titles, and a weakness for cooking games and anything with zombies.
Related Articles: Layers of Fear
Share
Tweet
Share
Submit

Arcade1Up announces their first at-home casino game, Wheel of Fortune, along with a portable Infinity game board & more