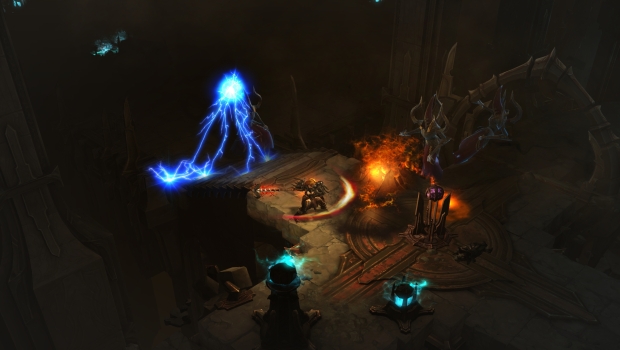 Diablo III: Reaper of Souls isn’t just an expansion for the series – it’s a complete revamp. With the Auction House being shut down, the addition of Loot 2.0, Paragon 2.0, and a bevy of new upgrades in advance of this expansion’s release (which are in the game now, no expansion required), I believe Reaper of Souls turns Diablo III into the game the team wanted to release back in May of 2012.

Reaper of Souls adds Act V to the overall story arc, continuing directly after the war in Heaven and the destruction of the titular character. Tyrael, the former Archangel of Justice, now Aspect of Wisdom and a mortal, has taken up the sword as the defender of Sanctuary. The war between Angels and Demons has taken a horrible toll on humanity, but The Prime Evil has been contained within the Black Soulstone. Secreted away from world, Tyrial attempts to seal it away, but nobody can hide from the Angel of Death. Malthael, the Fallen Archangel of Wisdom, steals the Black Soulstone with nefarious purpose. Tyrial dispatched his surviving Horadrim to discover Malthael’s plan – welcome to the end of the world.

Story aside, Reaper of Souls brings a new character class to the fray – the Crusader. If you look at the character loadout, the Crusader fits a missing role – the true tank. Certainly you could equip tower shields, or wield huge weapons, but it is the holy Crusader that more accurately fits the namesake mold. To properly put the Crusader through her paces I did the only logical thing I could do – start the adventure from scratch. I was not disappointed. There are a great deal of improvements that raise the overall quality of the entire game, some cosmetic and some to build greater functionality.

The first improvement I noticed was the teleport map. Rather than a list with fancy filigree, the map now gives a visual overlay of your adventure path. It’s certainly more visually appealing, but it also shows just how far you’ve travelled in your crusade to stop the Prime Evils. Additionally you’ll also see new crafting materials in your bag. Rather than having to visit two vendors, you can now salvage your trash items into “Common Debris” that can be used for crafting at all levels. Combined with better sorting options like “Show highest usable” to help prune the list, this makes crafting manageable for any level character.

Loot 2.0 is a revolution for Diablo III, and it doesn’t require Reaper of Souls. Favoring quality over quantity, Loot 2.0 is likely a direct correlation to the shuttering of the Auction House. While you won’t have nearly as much stuff drop at your feet, the game now tunes what is dropped to the main stat for the class you are currently playing. Similarly, new set items and Legendary drops have been tuned up a bit with better balance through level ranges. For those who haven’t hit the level cap (60 for D3, bumped to 70 for the expansion), you’ll also find Legendary drops to be more plentiful – a good bump for those making new characters. Those Legendaries are now bound to your account though.

It’s not just the loot that was retooled, new difficulties have also been added. The range now jumps exponentially from Easy, Normal, Hard, Master, and Torment I through VI. Normal starts off with monsters having 100% health and doing 100% damage with no gold or XP bonus, and Torment VI giving each monster 8590% more health, dealing 2540% more damage, and granting 1600% more XP and gold for each kill. The difficulty now scales more effectively with the player level, with higher difficulties holding exclusive goodies. Legendary crafting materials and level 70 set items appear at the high end, as do five higher level gem classes to fill the sockets on your favorite items. It all helps to even out the difficulty of the game, making each transition less of a jarring experience – a solid improvement.

To help tackle the new difficulty levels and monsters (but certainly benefiting those still working on their favorite character to catch up to their friends) is a new bonus type. Pools of Reflection shrines provide a stackable experience point boost that lasts until you reach an XP cap, or die trying.

Once you’ve completed Act V with any character you’ll get access to Adventure Mode. This allows players a way to experience all the loot grinding and monster crushing you want to tackle, with nearly all of the story elements pushed out of the way. This means that a brand new character (or any other on your account) can skip chasing down Wretched Mothers and get right to whatever area you feel you can handle. This also allows you to farm items and experience in this new mode and then start the story on a higher difficulty level, or bounce back and forth between them as you see fit. Since all waypoints are unlocked, you can feel free to jump in any depth of the pool you’d like.

If you’d like a little bit of focus, you can also tackle Bounties. These randomized objectives only appear in Adventure Mode, giving players a specific beastie, boss, dungeon, or event to tackle for additional XP, gold, and the occasional item drop. As these are random, they are different for every new Adventure Mode game. You’ll also pick up a new object called Rift Keystones which opens up another Adventure Mode mainstay – Nephilim Rifts. I call them a quick trip to crazy town.

Nephilim Rifts are as random as the rest of Adventure Mode, but somebody turned off the sanity meter. Culled from all acts of the game, these dungeon vignettes are cobbled together from pure entropy and chaos. Random beasts, bizarre lighting and weather, unpredictable interiors and layouts, bizarre shrines (+500% speed boost and knockback anyone), and a completely unpredictable Rift Guardian boss encounter makes each of these something unique and occasionally explosively difficult – Hardcore characters enter at your own risk.

Also retooled is the Paragon system. No longer is this capped, allowing players a completely new way to construct their buildouts. There are four main areas to modify – Core, Offensive, Utility, and Defensive, each with four stats to adjust. The Paragon levels are now account-wide as well, spread to all characters at that difficulty level. You can also re-adjust those points at any time. Min/Maxers will eat this feature up, even if it’s not a big focus for me.

If there is one area where I spend a great deal of time, it’s in crafting. Well, Reaper of Souls brings a new addition to the crafting world – the Mystic. This NPC, for a fee and some materials of course, can transmogrify and upgrade objects. That is to say, alter the stats and look of a specific item, essentially paying to take another spin at the wheel of chance. The stats are recalculated at random, giving you three new stats. If you don’t like those stats, you are welcome to roll again, but the cost goes up every time. The Transmogrification system is one of pure vanity, allowing a player to switch the visual appearance of any object to look like another. This solves the “Godly Plate of the Whale” roving visual clone problem that’s been present since the original game.

Digging a little deeper into the Crusader reveals a very dangerous class. The Crusader’s primary focus is on massive weapons and even larger shields. Shield Bash does exactly what it sounds like it should, Blessed Hammers unleashes holy mallets that fend off foes with incredible damage, Fist of the Heavens calls a pillar of blessed lightning that arcs to nearby enemies, and Consecration creates a safe area where you and your friends can heal and catch your breath. Beyond direct damage, the Crusader can summon a massive steed to run down her foes, call in an air assault of fiery pitch, and unleash the light of Heaven itself with Heaven’s Fury to burn demons to ash. She also has several passive skills that can buff her and her comrades in battle, raise her holy-based damage, increase damage absorption, and even increase life regeneration.

As your levels climb and you earn runes to augment your powers, you’ll find that a great many of them go from being dangerous to blindingly powerful. Like all other classes, knowing how to wield your power arsenal makes you far more dangerous than randomly flinging spells and skills. I found that the Crusader class was a very accessible for novices and experts alike, deftly balanced to compliment any party or to fight against the Prime Evils on her own. While I wasn’t a big fan of Hammers of Justice, there are so many weapons to choose from that it served as hardly a bump.

In a nod to the heritage of Diablo II, there is a new currency in Reaper of Souls. Through completing bounties and from Horadric Caches (rewards for completing all bounties in an Act) you will receive Blood Shards. These shards can be exchanged for randomized and often very powerful goodies. This little bit of gambling immediately reminded me of buying things from Gheed, Elzix, and Anya from Diablo II, rewarding me with another source of awesome Rare, magical, and occasionally even Legendary loot.

It doesn’t take but a glance upwards at the last near-1500 words to see that Reaper of Souls is far more than a single character and a new chapter expansion. So much has changed, and literally all for the better. By taking the chains off of the game mechanics, removing the disruptive Auction House, and refining the game mechanics that serve as the base of Diablo III, Reaper of Souls is finally the loot-grabbing adventure we all wanted.

Ron Burke is the Editor in Chief for Gaming Trend. Currently living in Fort Worth, Texas, Ron is an old-school gamer who enjoys CRPGs, action/adventure, platformers, music games, and has recently gotten into tabletop gaming. Ron is also a fourth degree black belt, with a Master's rank in Matsumura Seito Shōrin-ryū, Moo Duk Kwan Tang Soo Do, Universal Tang Soo Do Alliance, and International Tang Soo Do Federation. He also holds ranks in several other styles in his search to be a well-rounded fighter. Ron has been married to Gaming Trend Editor, Laura Burke, for 21 years. They have three dogs - Pazuzu (Irish Terrier), Atë, and Calliope (both Australian Kelpie/Pit Bull mixes).
Related Articles:
Share
Tweet
Share
Submit