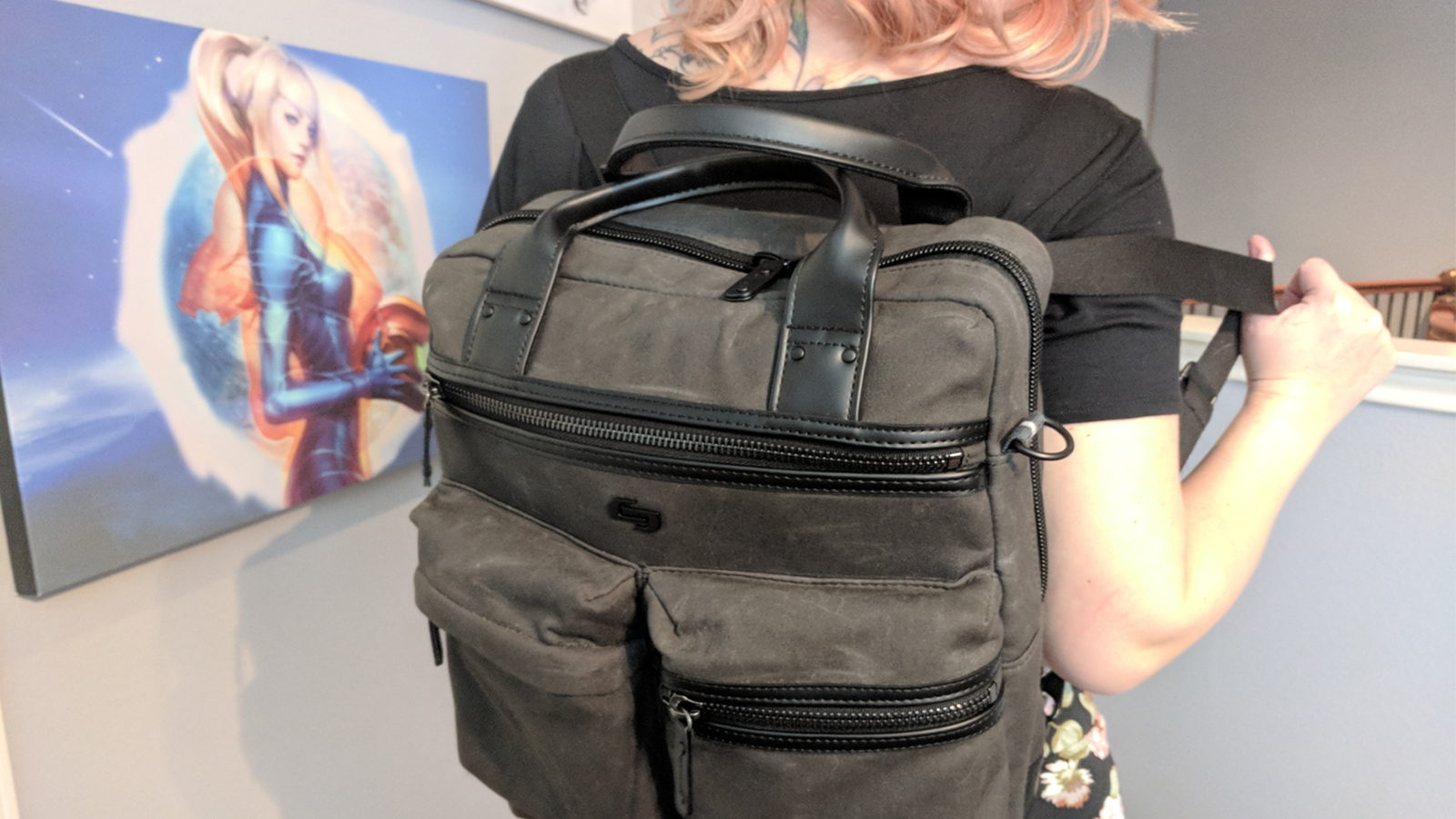 I’m always on the hunt for solid gaming backpacks. Plenty of manufacturers know that Macs and PCs come in at a 15” screen size, but inexplicably seem to create their bags to hold something slightly smaller than that. Even when they do create a properly sized bag, they ship them with zippers that don’t hold up, or just plain look rough after a few months of use. Solo New York is looking to change that with their Alastair line of bags.

The most immediately noticeable aspect of the Alastair is that it is a multi-use bag. Usable as a briefcase, a backpack, or with the included strap as a shoulder bag, the self-described “vertical briefcase” is a comfortable carry no matter how you like to schlep your gear.

In terms of construction, the Solo team spared no expense. The body of the bag is a waxed canvas that’ll look familiar if you ever spent time in the military. We’ve been using this material for our go-bags for over a decade, so to say that it’s durable is an understatement. Solo took it to the next level by treating it with a wax that should, at the very least, make it water resistant. It’s not an advertised feature, but cloth-reinforced zipper structure, and the treated surface of the bag suggests that it’d protect your precious electronics from the occasional splash of nature’s fury.

Speaking of the zippers, they’re my greatest complaint with my other bags, and easily one of the strengths of the Alastair. The oversized zipper slider and teeth create a system that won’t bind up, slip its track, or wear easily. If you want to see what happens to a smaller (and frankly, cheaper) zipper after about six months of frequent use, check out what’s happening to my other bag. Simply put, the Alastair won’t have this problem. Beyond the oversized zipper slider, the team also attached a double-riveted and reinforced PVC and Vinyl pull tab on every zipper, not just the one to access the main body of the bag. 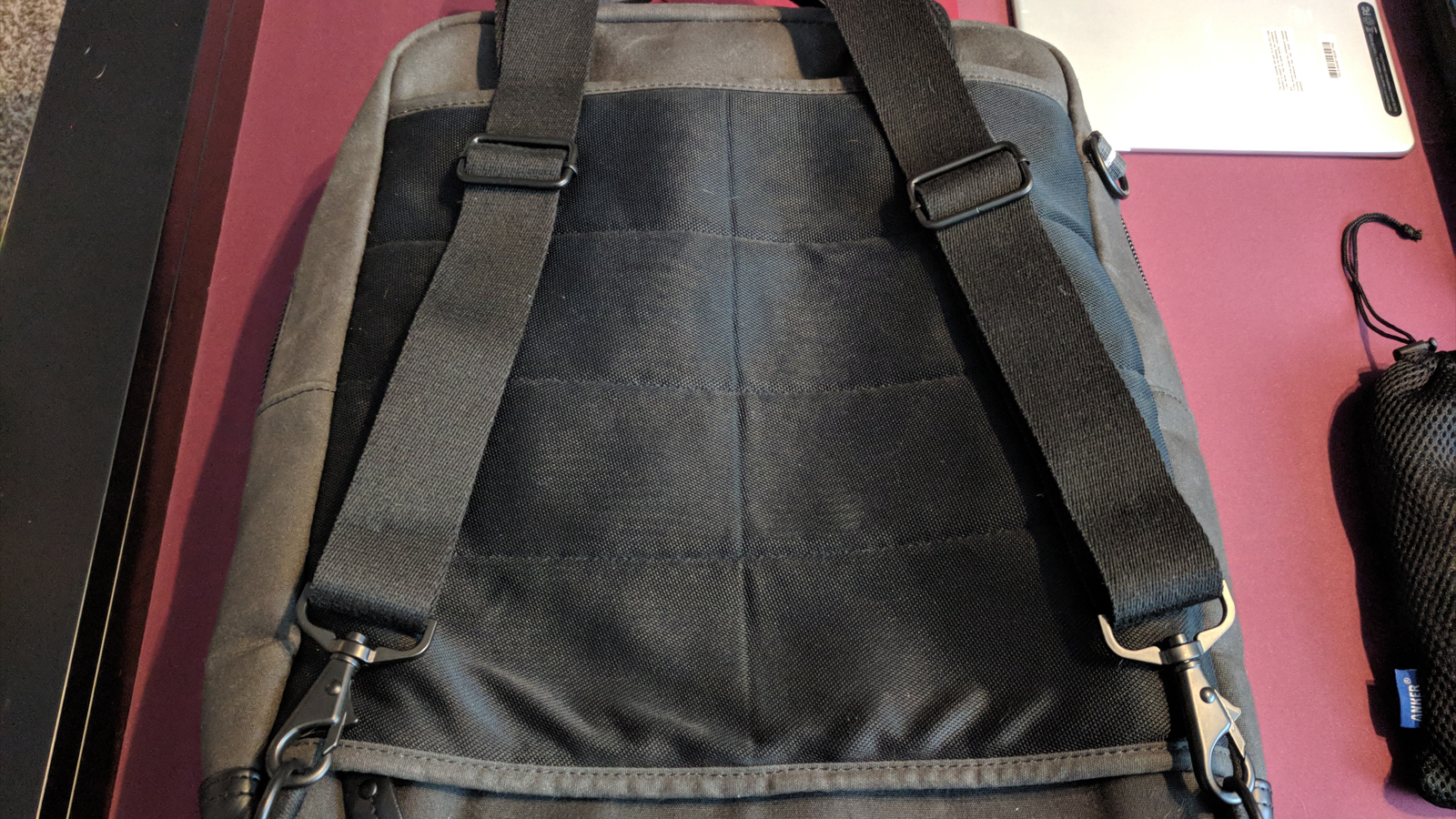 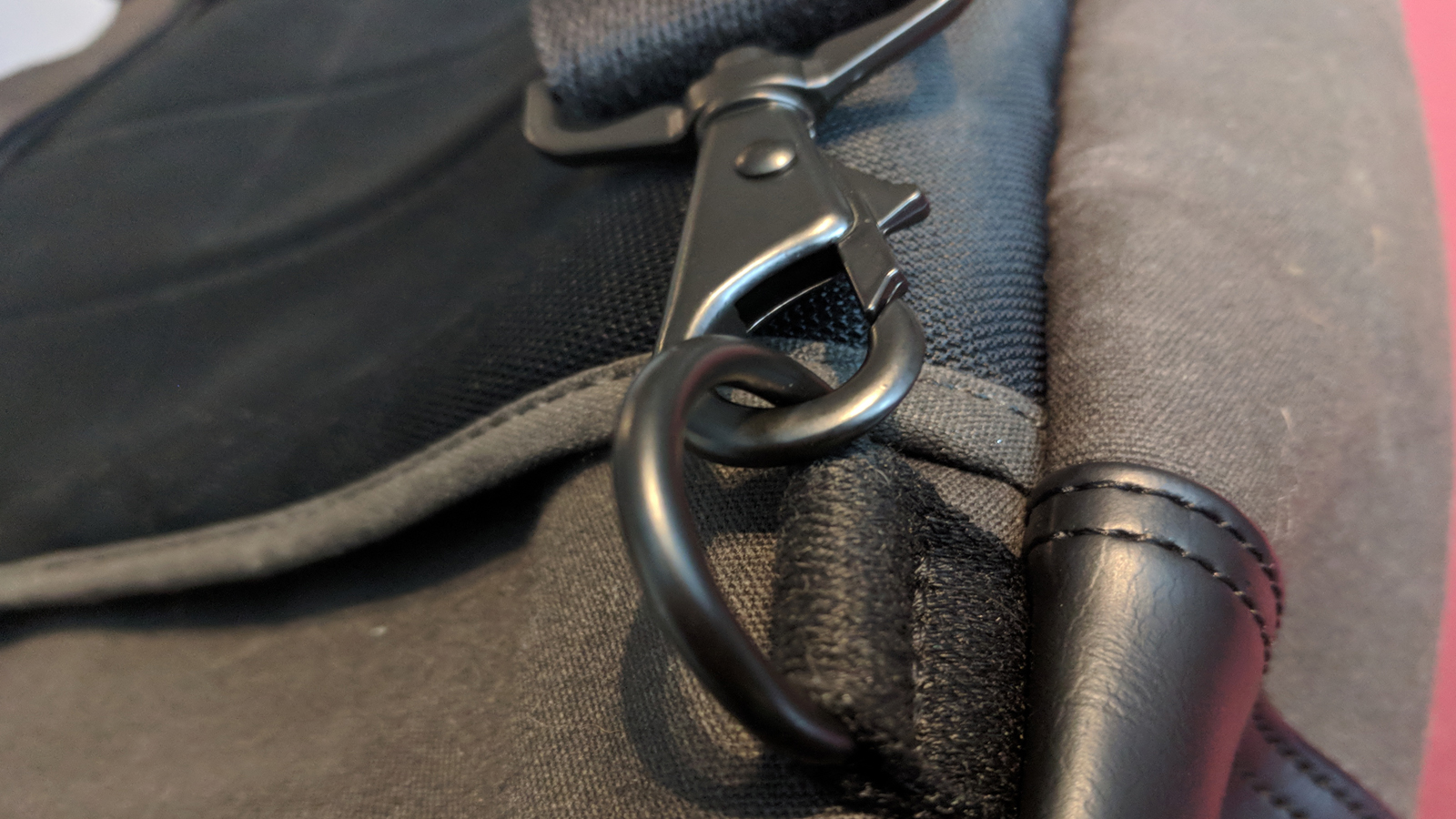 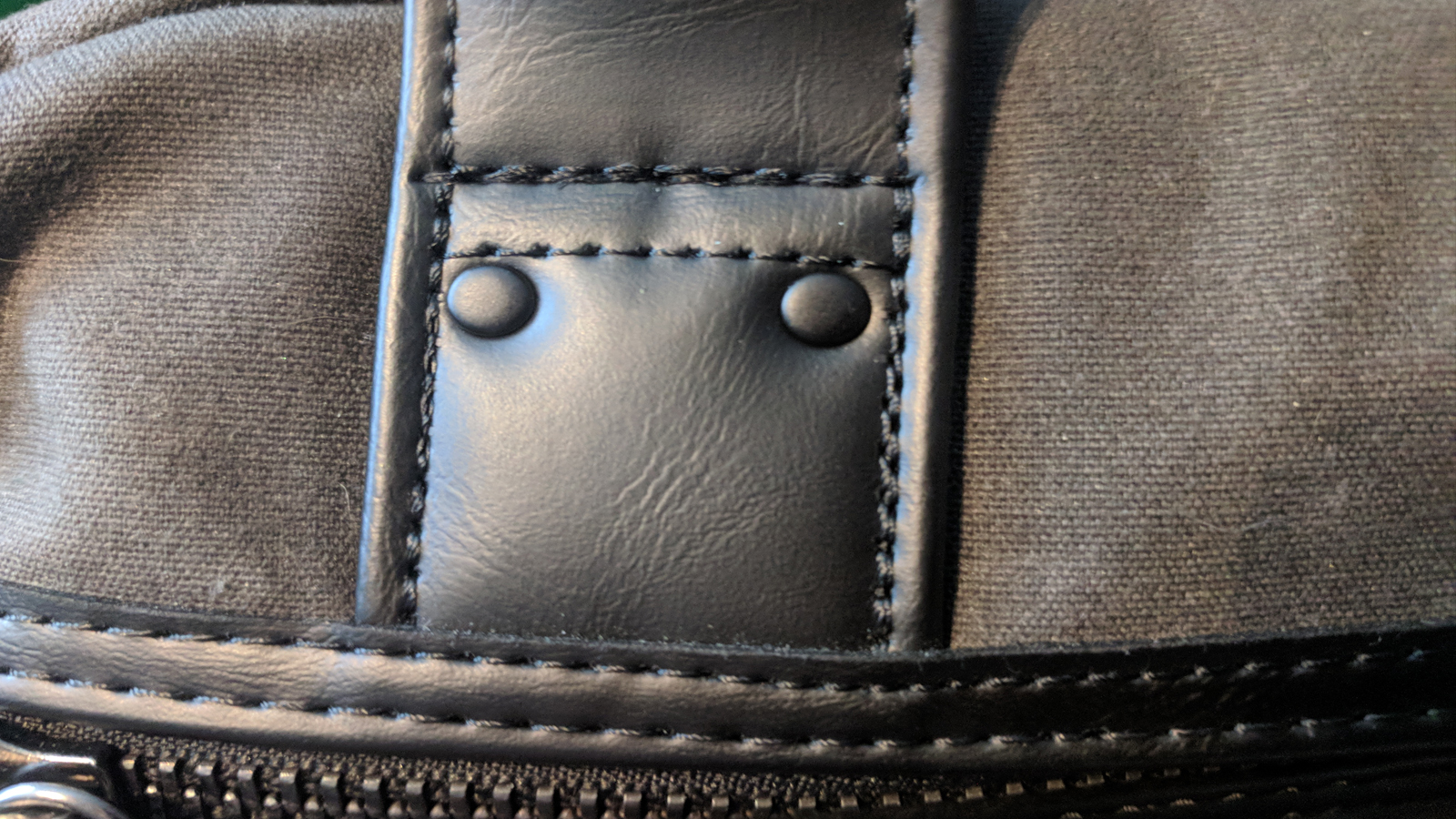 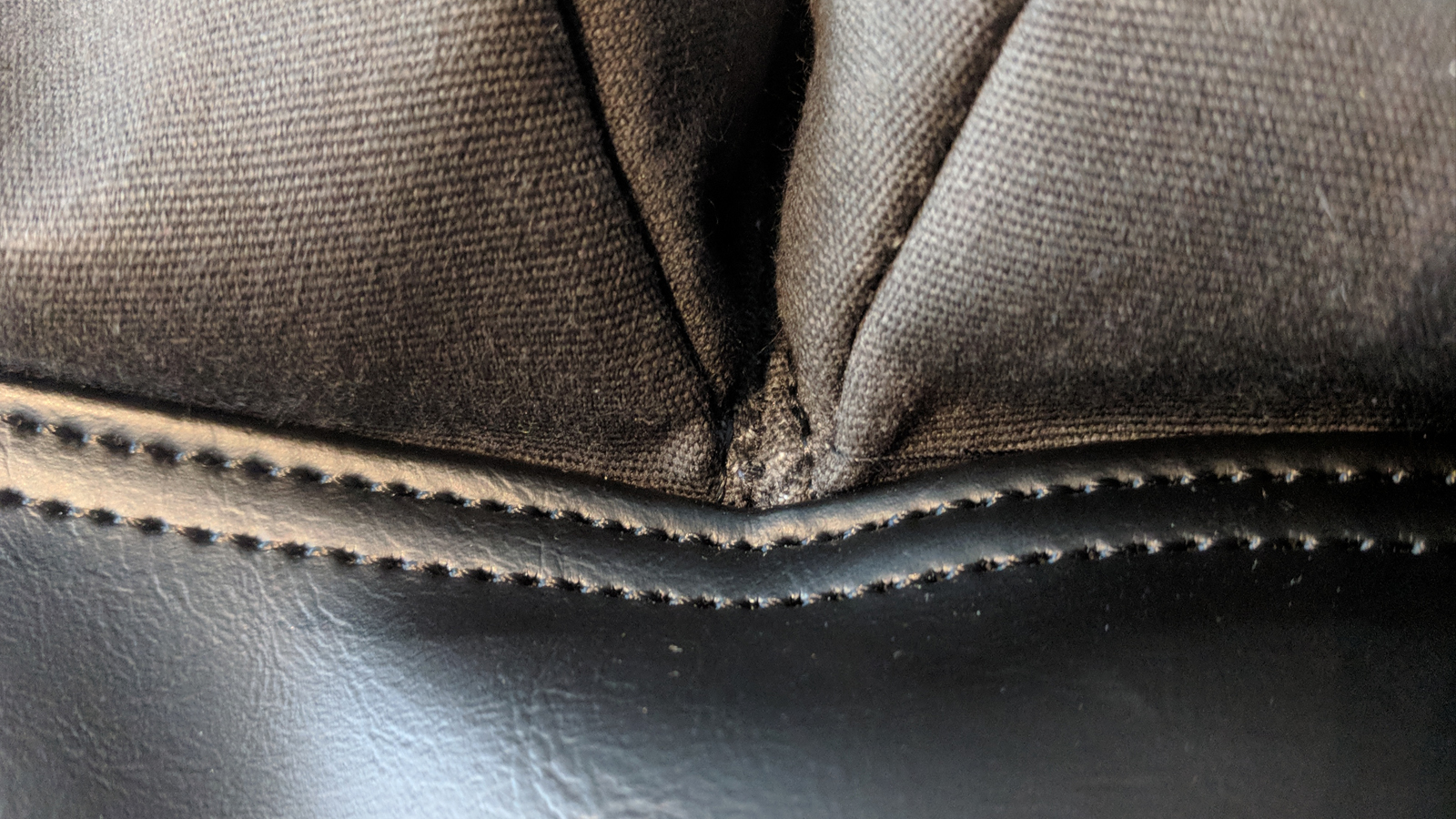 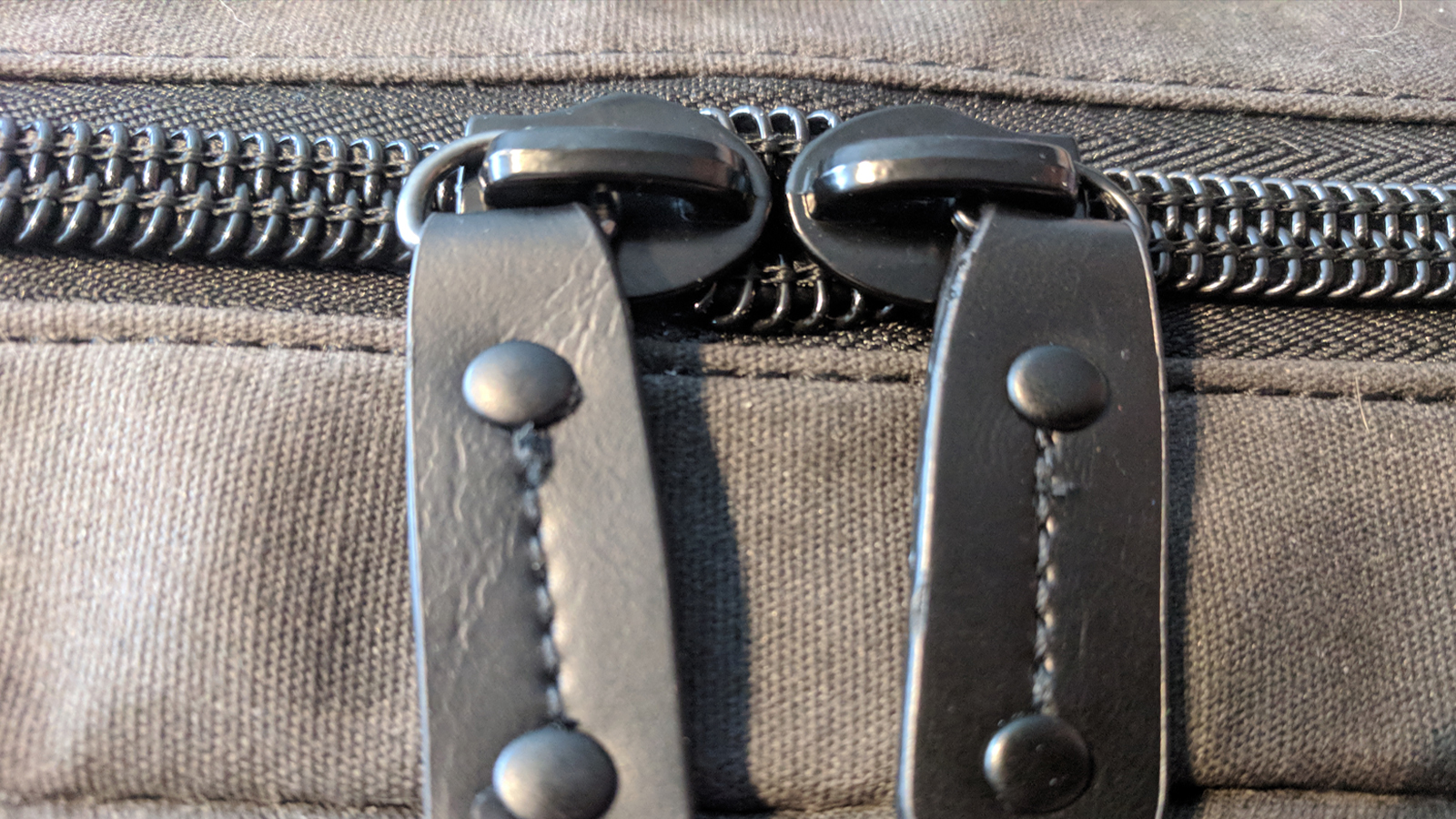 The double-stitched reinforcement extends beyond the zipper construction. In fact, every point that might be load bearing such as the carry handles, the space above and below every zipper race, and every body intersection between the canvas and the PVC and Vinyl is double reinforced to ensure the bag will withstand daily wear and tear. Even the key holder in the interior of the bag has a square of reinforced stitching. Every piece of hardware on the bag, including the zippers, are made of metal, so there’s little chance of breakage in that area as well. It’s the little things that make a difference between a bag that last for months versus one that lasts for years, and clearly the Alastair is the latter.

The bag measures in at 20” x 17” x 6”, striking a good balance between being roomy enough to hold your gear without turning into something that feels like luggage on your back. The bag consists of three large bags in the front, in addition to the large storage compartment on top. There’s what I’d call an “optional” pocket in the back, as well. This optional pocket is actually a pouch to hold the straps for the backpack, but it has a zipper at the bottom to stop them from falling out of the bottom. It also allows you to put the backpack over a pull handle on a piece of luggage, but when you aren’t using like that, it makes a great place to store your gloves or a hat. 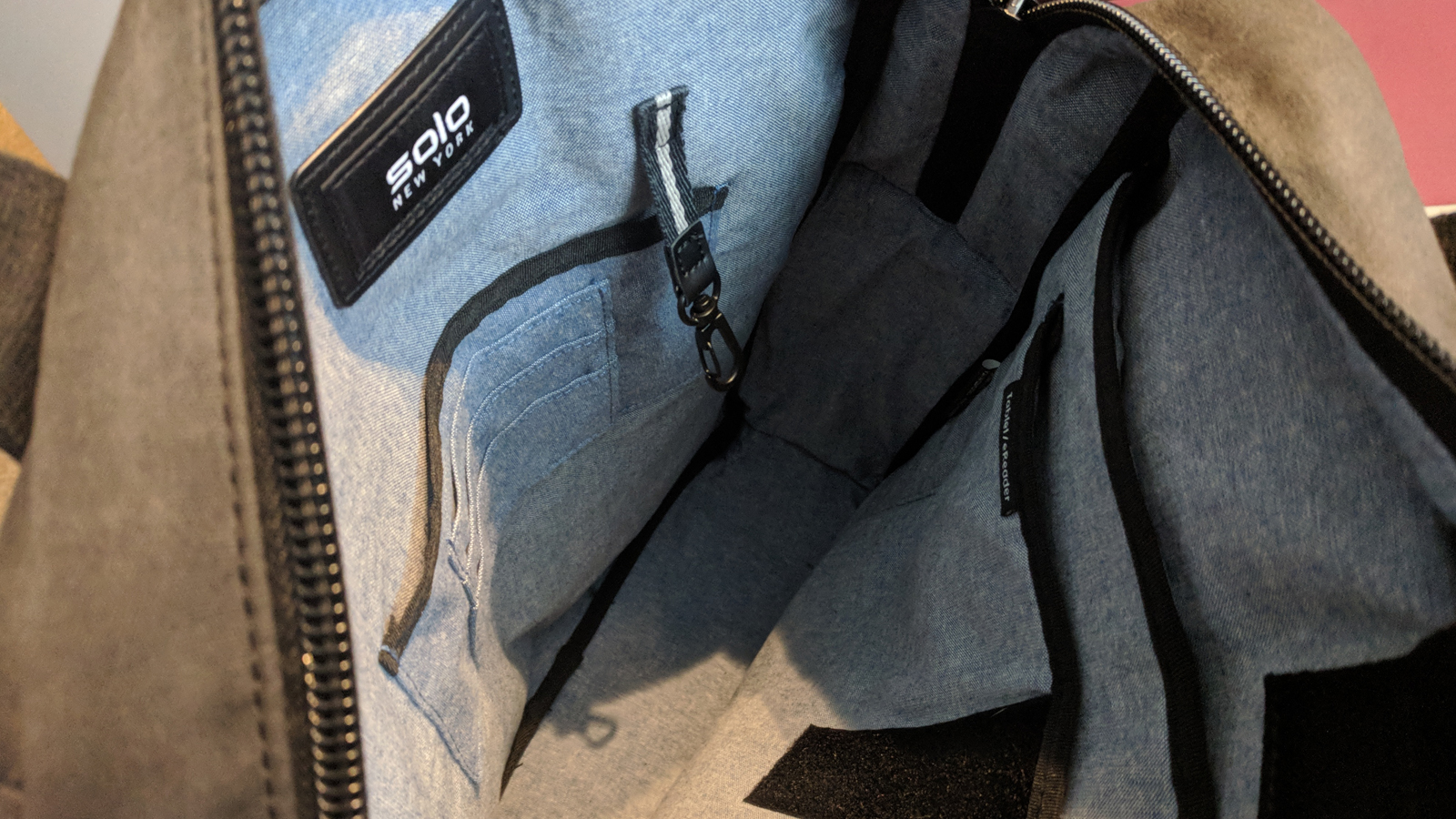 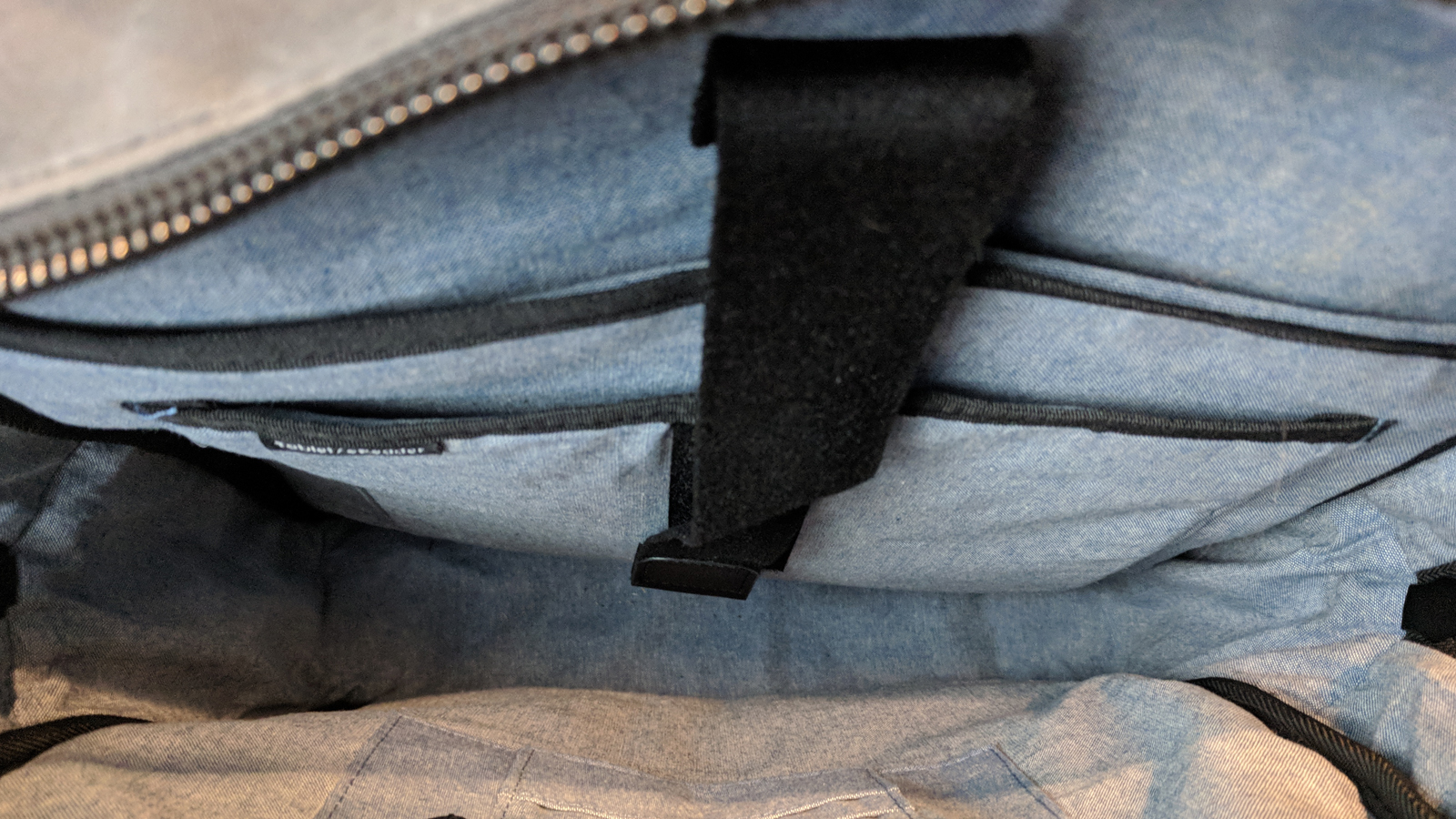 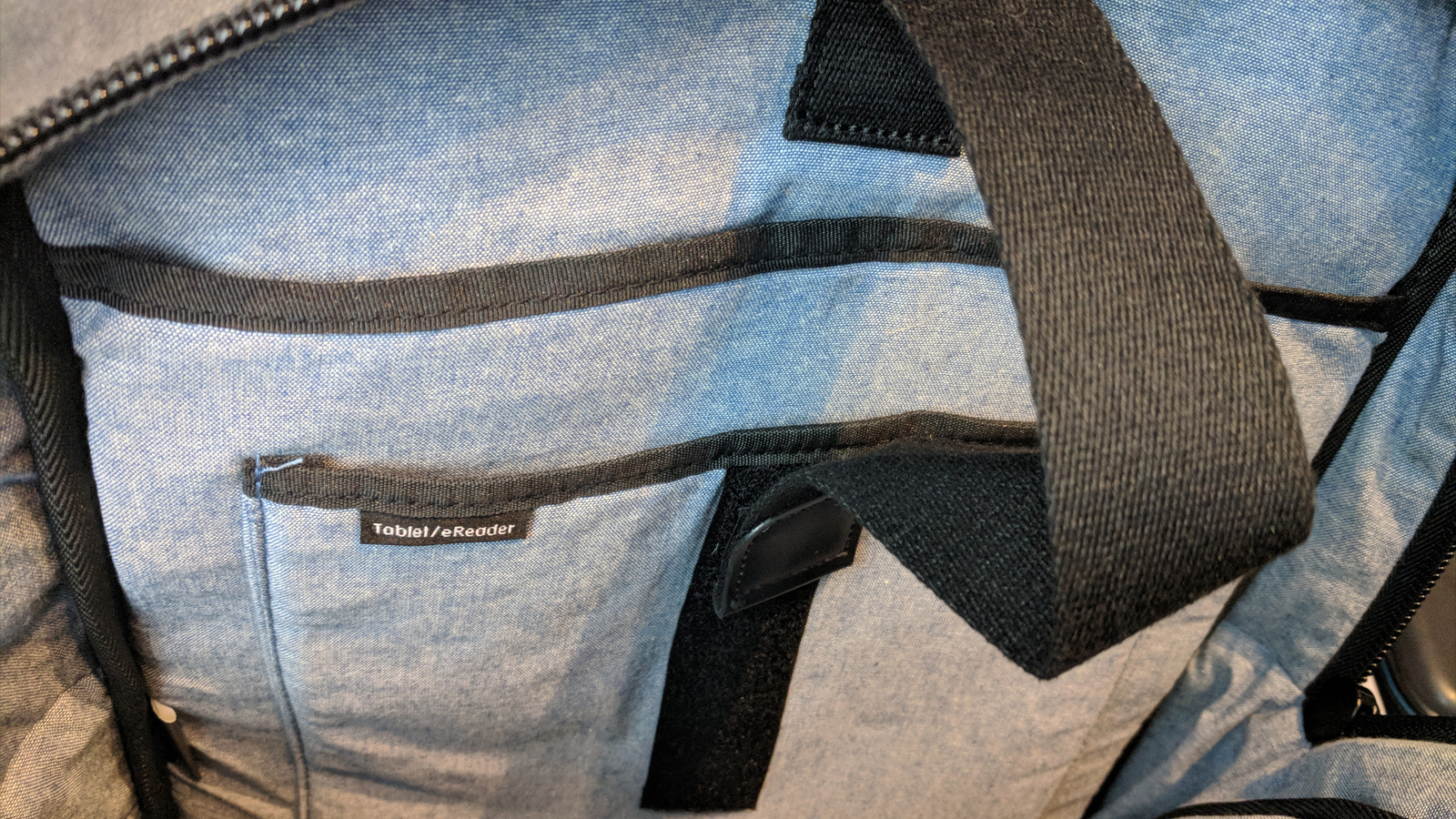 I’m certain that the Solo team had ideas for all of these pockets, and one is even labeled “Tablet/eReader”, but my use case is more evenly split between executive and gaming junkie. As such, I’ve been using this for my usual day tech payload, but have also taken it on a trip out to California to check out Far Cry 5.

Shoulder carry is the likely use for me, if I can tear it away from my wife.

From the second I got to the airport, it was immediately noticeable how much more convenient this bag was going to be. My laptop was easily accessible without having to unpack my entire bag to unload it. The numerous pouches kept everything sequestered to where it needed to be, and I’m not gonna lie — it’s just plain stylish as all get out.

It works nicely in all three modes.

To really put the bag through its paces, I decided to see just how much of my gaming gear I could jam into it. It turns out that you can fit far more than any reasonable person would need for a casual trip into this bag without breaking a sweat. As you can see below, I comfortably put a 15.6” laptop, a keyboard, a 8.9” Kindle Fire HD, a Windows CE tablet, my Nintendo Switch and case, a full-sized battery pack and cables, my Nintendo 2DS, the Nintendo SNES Mini, two controllers, a mouse, my headphones, and all of the associated cables and cords into the Solo Alastair, and still had enough space for my wallet, keys, and a few snacks. To say that this bag has a deceptive amount of space is an understatement. For a daytrip where you can’t decide what gaming gear to bring, you could conceivably just bring it all in this bag!

If you are this indecisive, you can still pack it all into the Solo Alistair.

The team at Solo New York believe in their product. While other bags often have no warranty whatsoever, or at best, 90 days, Solo warranties the Alastair for a whopping five years. They guarantee that it’ll be free of defects in materials and craftsmanship for five years from the day you buy it. Having churned through entirely too many backpacks that look fantastic for about three months, I have a deep appreciation for a company that stands behind their work.

Every inch of this bag screams quality, and the five year warranty Solo offers backs that up. From the double-stitched reinforced zippers, to the deceptively large storage space, the Solo Alastair is a perfect bag, backpack, or vertical briefcase for the gamer on the go.

Ron Burke is the Editor in Chief for Gaming Trend. Currently living in Fort Worth, Texas, Ron is an old-school gamer who enjoys CRPGs, action/adventure, platformers, music games, and has recently gotten into tabletop gaming. Ron is also a fourth degree black belt, with a Master's rank in Matsumura Seito Shōrin-ryū, Moo Duk Kwan Tang Soo Do, Universal Tang Soo Do Alliance, and International Tang Soo Do Federation. He also holds ranks in several other styles in his search to be a well-rounded fighter. Ron has been married to Gaming Trend Editor, Laura Burke, for 21 years. They have three dogs - Pazuzu (Irish Terrier), Atë, and Calliope (both Australian Kelpie/Pit Bull mixes).
Related Articles: Culture, Hardware, Solo Alistair
Share
Tweet
Share
Submit