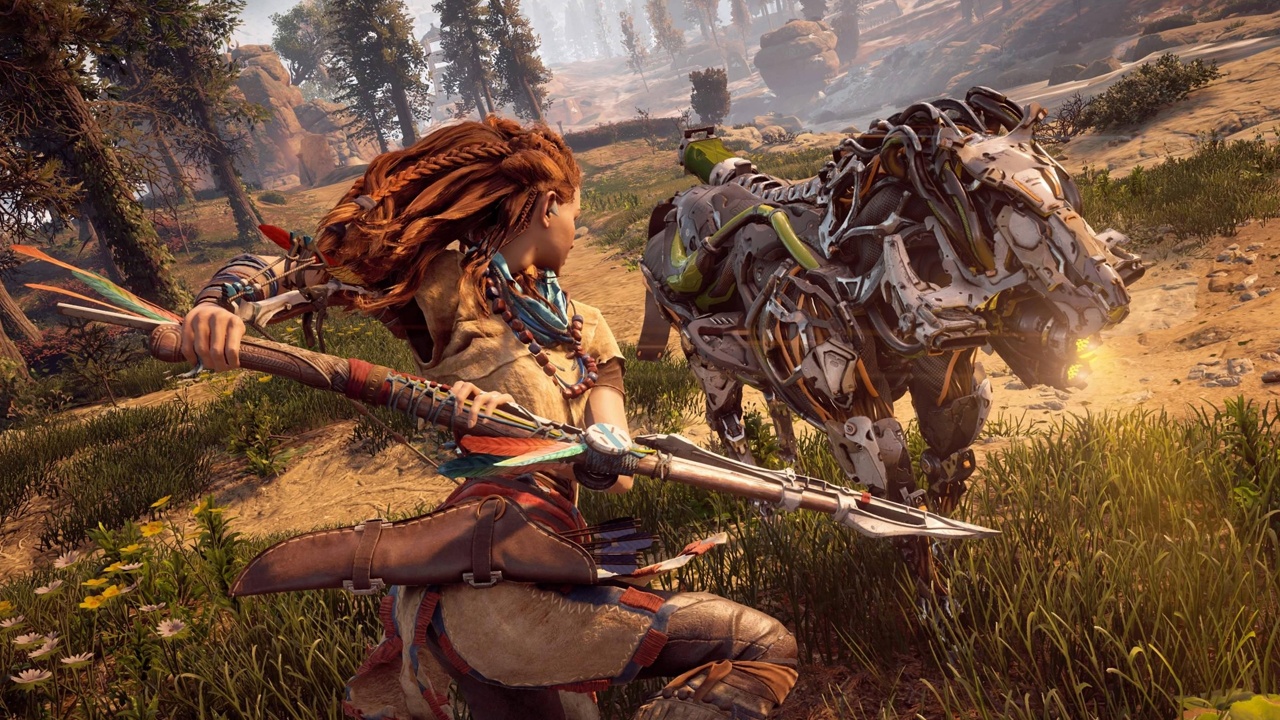 If there’s a title that made PC players seriously consider abandoning their favorite platform and picking up a console, it’s Horizon Zero Dawn. Absolutely gorgeous, the game captivated us and gave us a completely unique combat experience as we fought giant mechanized dinosaurs in our battle to retake the planet we lost to time and mysticism. It’s been three and a half years since Guerrilla Games gave us this absolutely gorgeous game, and its sequel, Horizon Forbidden West, has recently been announced as a 2021-slated PlayStation 5 title, so what better time to release the original game on PC? The game already looked absolutely stunning on the PlayStation 4 Pro, offering up beautiful open world vistas in 4K, HDR lighting, and a rock solid framerate — what could the PC version bring to the table that we haven’t already seen? A whole heck of a lot, actually — let’s take a look at Horizon Zero Dawn: Complete Edition on PC.

Before we jump into the PC version, we should take a closer examination of the PlayStation 4 version. I’m going to stick to the PS4 Pro as that had the best performance, offering up two modes for players — a “Favor resolution” and “Favor performance”. Favor resolution pushes the game to 4K resolution for those who have a TV to match it, coming in at 30fps, with very infrequent drops to 27 or 28fps in very densely populated areas like the absolutely gorgeous Meridian City. Favor performance drops the resolution to 1080p, but unlocks the framerate, clocking in at an immovable 30fps, regardless of how full of action and people the scene gets. Better still, it also smooths out some of the far-distance LOD pop-in, though that’s so infrequent that it’s hardly even worth mentioning. No matter your choice, the game looked absolutely amazing to begin with, so I was eager to see how it looked with a variety of hardware to throw at it. Here’s the first 30 minutes of the game to showcase this new version at max quality, captured on a 2080Ti:

Naturally, being on PC means exposing a great many more configurable options to maximize performance. The game supports an “Adaptive performance FPS” which attempts to manipulate the various sliders on the fly until you hit the targeted framerate, selectable from turning the feature off entirely all the way up to a whopping 120fps. You can also set your framerate limit to unlimited. Render scale lets the game adjust the rendering resolution independently from the display resolution, scaling up or down to give you the best possible output. Naturally the game also supports HDR rendering, and for those of you who suffer from motion sickness, there’s now an adjustable FOV slider so you can tweak your field of view to address your needs. I was surprised to see the level of support for ultrawide monitors as the game supports 16:9, 21:9, and even 32:9 aspect ratios. The game looks absolutely phenomenal in this ultrawide aspect ratio, though I don’t have the bezelless dual monitor or single ultrawide to experience it properly. The cutscenes do remain in their 16:9 ratio, but there’s nothing quite like experiencing the world of Horizon Zero Dawn with this much visibility. 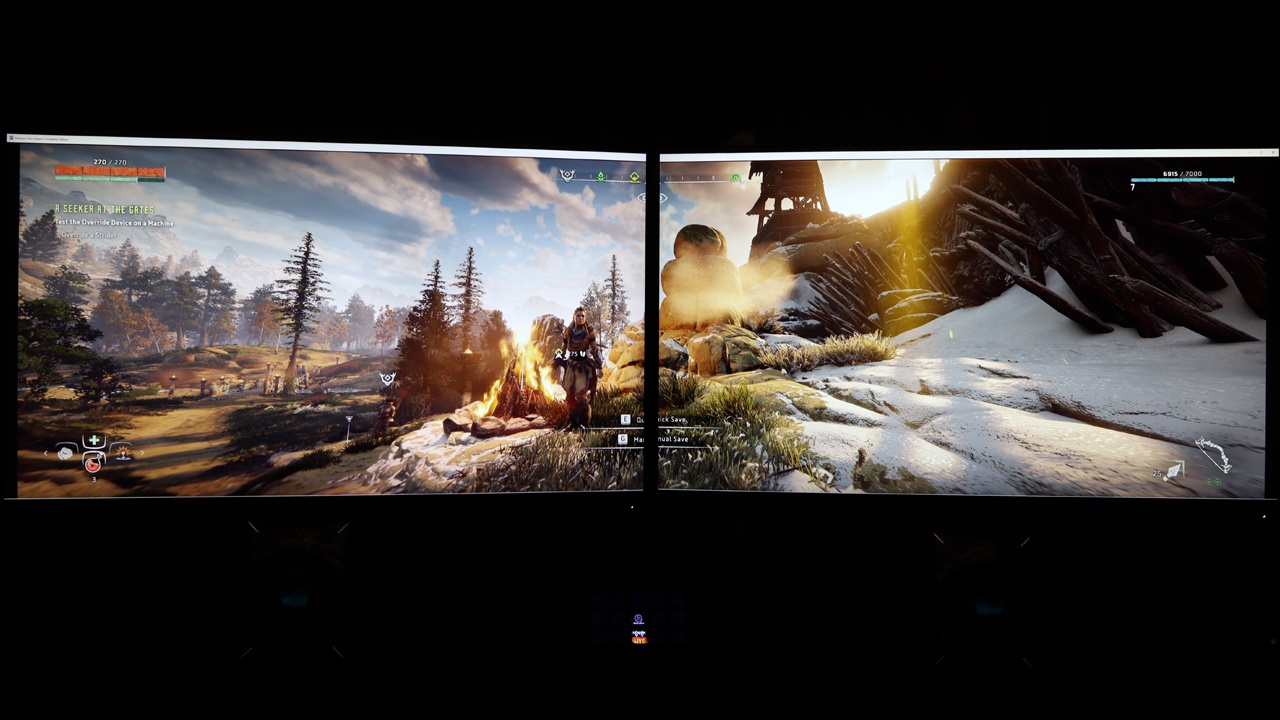 This picture doesn’t even begin to show how amazing this is in widescreen.

Beyond aspect ratios, framerates, and resolutions, the game also has nine adjustable controls to further tweak the look of the game. Texture and model quality, anisotropic filtering, shadow depth, reflections, clouds, motion blur, ambient occlusion, and anti-aliasing are all present and adjustable here. There is even a benchmarking utility you can use to test how your system will handle the four presets, or your individual tweaks. Here’s a quick look at what the game will produce using a Ryzen 7 3700X and a GeForce GTX 1080 Ti running at 1440p, with all of the bells and whistles set to Ultimate. 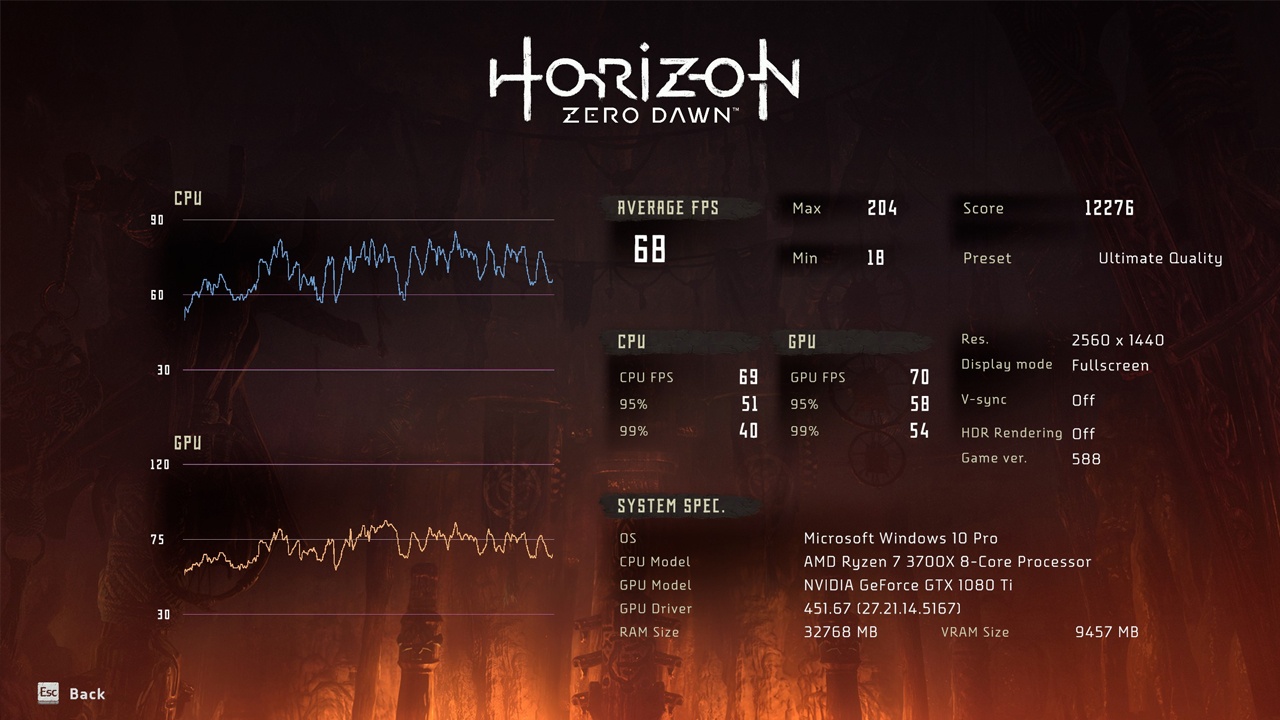 The assets are the same as the already-fantastic PlayStation 4 version of the game, but running the game at 144fps at 4K resolution is something to behold if you’ve got the gear to run it. That said, the game supports a less beefy PC just as well, able to deliver 1080p/60fps at the same detail settings as the original release on an Intel 4770K / Ryzen 5 1500X with 16GB of RAM and a GeForce GTX 1060 or Radeon RX 480. Essentially, if you have a PC built in the last five years, Horizon Zero Dawn is going to look fantastic for you. That said, there are a few tweaks to the formula that you should know.

If you do a direct comparison of the game, you’ll likely notice some very small, but very meaningful, tweaks. Foliage moves more realistically as Aloy crouches and moves through it, and trees sway more naturally in the breeze. The foliage is more dynamic, and it only helps further immerse you in the world that Guerilla has created.

Moving to PC has also drastically reduced load times. The PlayStation 4 Pro took roughly 40 seconds to accomplish its initial load, but using a 7200 RPM Seagate Barracuda mechanical drive on my PC dropped that to 32. Moving it to a Seagate FireCuda 520 M.2 drive dropped that load time to just 13 seconds. Dying had me respawning in just 2 seconds! The game wasn’t heavy on load times to begin with, but it’s nice when you can get right to the action.

In terms of controls, the game does support a wide variety of controllers — namely whatever Steam will recognize, including a PlayStation 4 or Xbox One X controller or something more exotic. Personally, I’m enjoying the far greater accuracy of mouse and keyboard control. It took me a while to really dial in shots on incoming Watchers, allowing me to put an arrow in their oversized forward-facing eye. On PC it’s far easier thanks to being able to aim with the mouse, making combat a lot more precise. It makes hunting for foes that require follow-on shots far easier as you can keep your reticle trained on them more effectively, and nailing precision shots on weak points is more manageable. For those who like to tinker, you can also remap the controls to your heart’s content, and managing inventory is easier than cycling through choices with a controller. It’s always interesting to see how much support a PC port of a console-first game will have, but it’s clear that Guerilla really worked hard to ensure that mouse and keyboard is not only viable, but also precisely tuned. 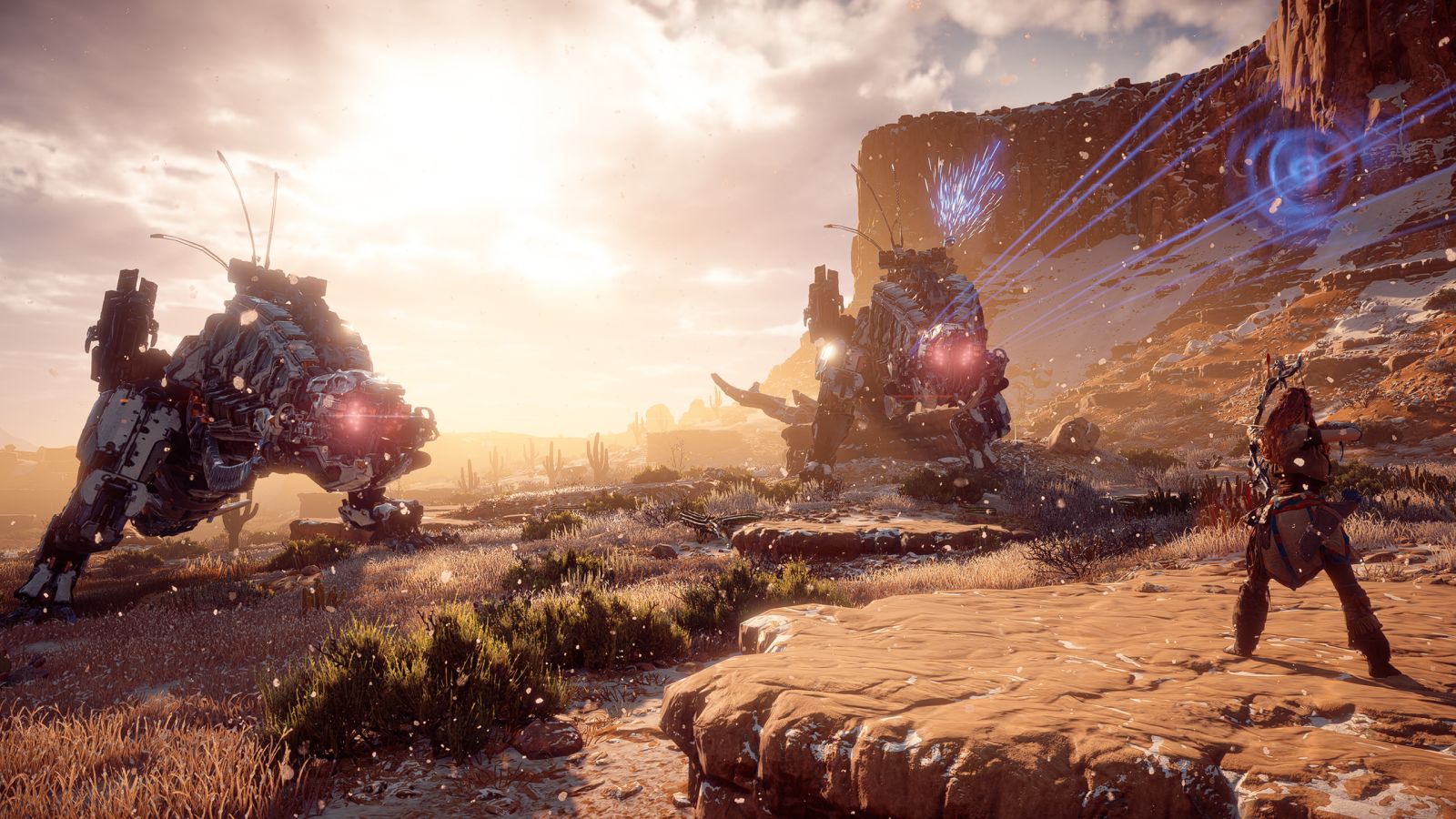 One of the most popular features of games published by Sony Interactive Entertainment is the inclusion of Photo Mode, and Horizon Zero Dawn was no exception. I’m very happy to say that this Complete Edition carries that feature forward, meaning PC gamers can now take their own amazing shots at whatever resolution they wish.

Travis mentioned the audio hiccups present in the PlayStation 4 version of the game in his review. Occasionally (and perhaps stylistically?) voices can appear muffled, or would only use one speaker and the center channel for some frankly odd output. I didn’t find any of this present in the few hours I’ve spent with this version of the game. While it’s certainly possible that it exists, it feels like the game might have just gone with a full surround presentation for this version. There is still a bit of a difference between the lip synching of major characters versus minor ones, but at least they sound better.

As the title suggests, this version of Horizon Zero Dawn comes complete with the Frozen Wilds expansion included, but it’s more complete than that. It carries with it years of optimization, improvements, and even a few enhancements. The game was gorgeous to begin with, but as we look towards the game’s sequel on Sony’s upcoming platform, we are also looking at the best possible version of the original, and finally on PC.

An already gorgeous game in its own right, Horizon Zero Dawn: Complete Edition celebrates this amazing title on PC with a host of improvements.  Catch up on an amazing adventure and get ready for Horizon Forbidden West next year.