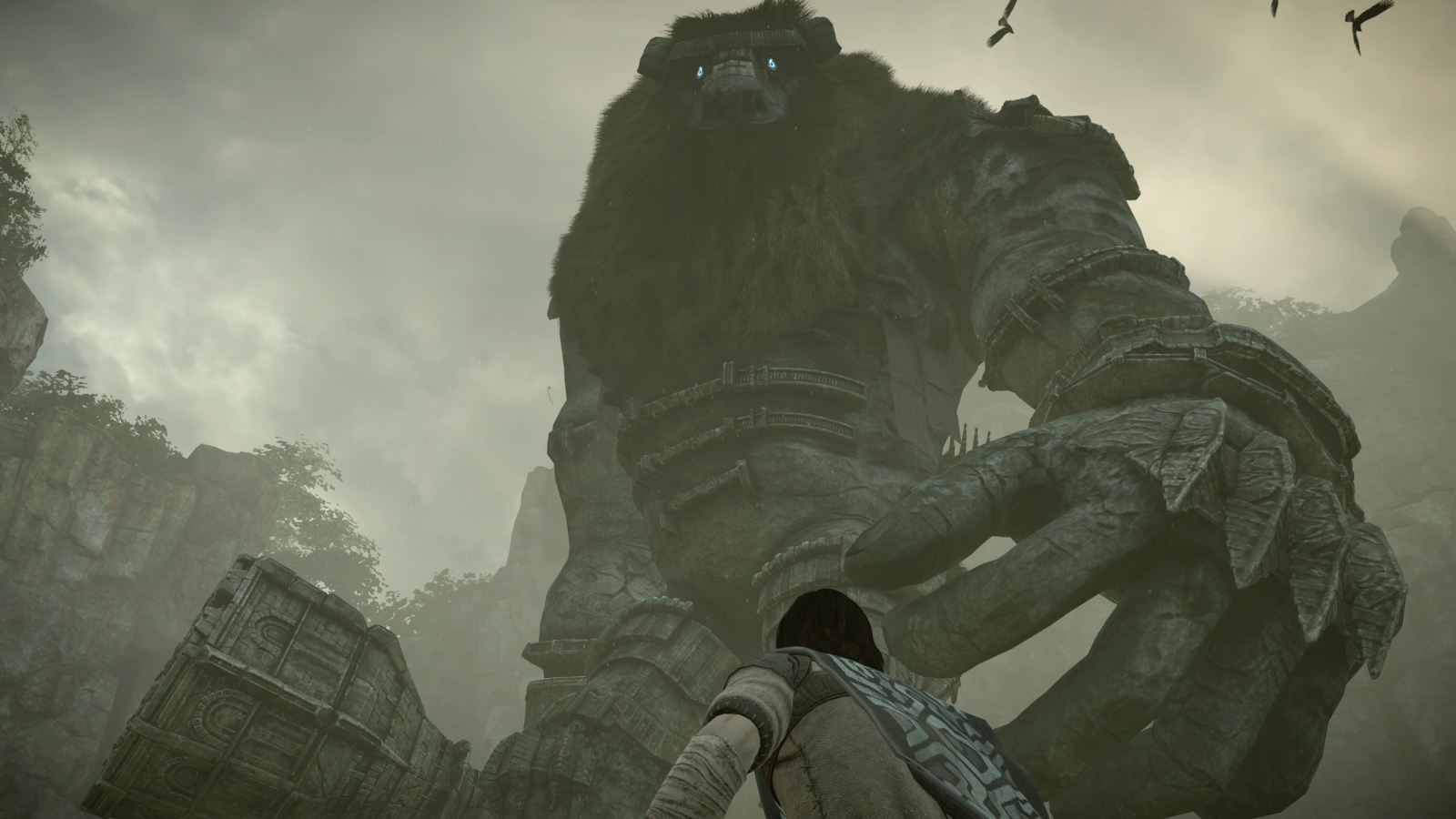 It has been a whopping twelve years since the original release of Shadow of the Colossus in October of 2005 for the PlayStation 2. Re-released on PlayStation 3 in October of 2011, the game saw new life for a fresh generation of gamers. Now, the game has come to PlayStation 4, and it stands as one of the best games ever released on any platforms — a timeless classic in every way. Sometimes it’s hard to not have a review turn into a love letter, but that’s precisely what everything past this point will be — let me tell you why you need this game in your PlayStation 4 library, especially if you’ve missed out before.

Sony enlisted the help of Bluepoint Games to bring this Remastered edition to life as that team helped them with the God of War Collection, the PlayStation 3 Ico & Shadow of the Colossus Collection, PlayStation All-Stars Battle Royale, and Uncharted: The Nathan Drake Collection in their past. Needless to say, Bluepoint Games has a lot of experience under its belt.

Shadow of the Colossus on PS4 Pro - First 5 minutes

The first and most obvious update is the graphical upgrades for Shadow of the Colossus. The Shrine of Worship that serves as the central hub of the game jumps from a few thousand polygons in the original release to several million, and to great effect. From the moment you trot across the bridge, to the moment you crest the cliff and face off against the incredible scale of the first Colossus, it’s immediately clear that this isn’t a remaster or an upgrade, but rather a complete rebuild. With vastly-improved draw distances, this version of Shadow of the Colossus can stand toe to toe with any modern AAA game. 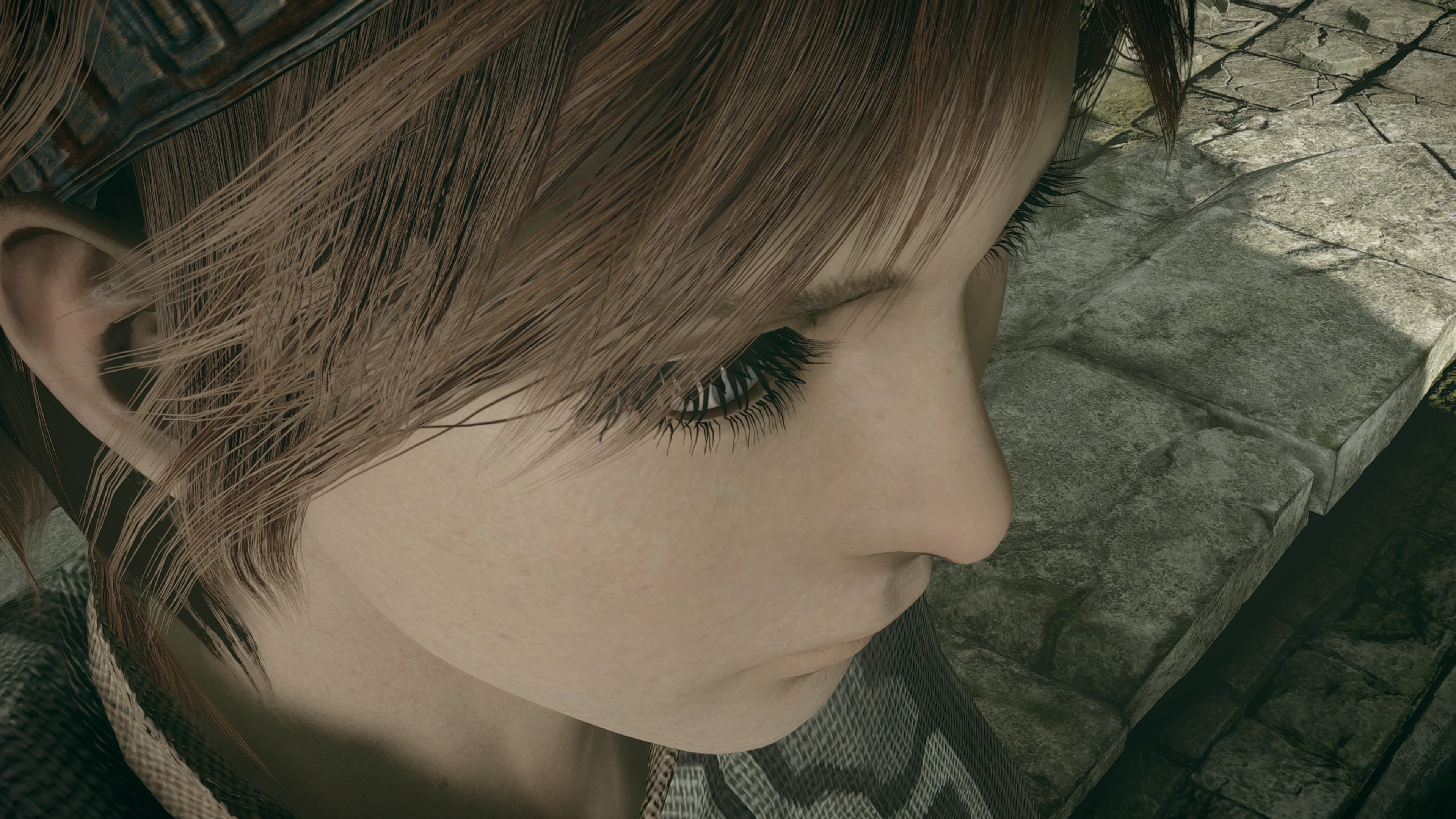 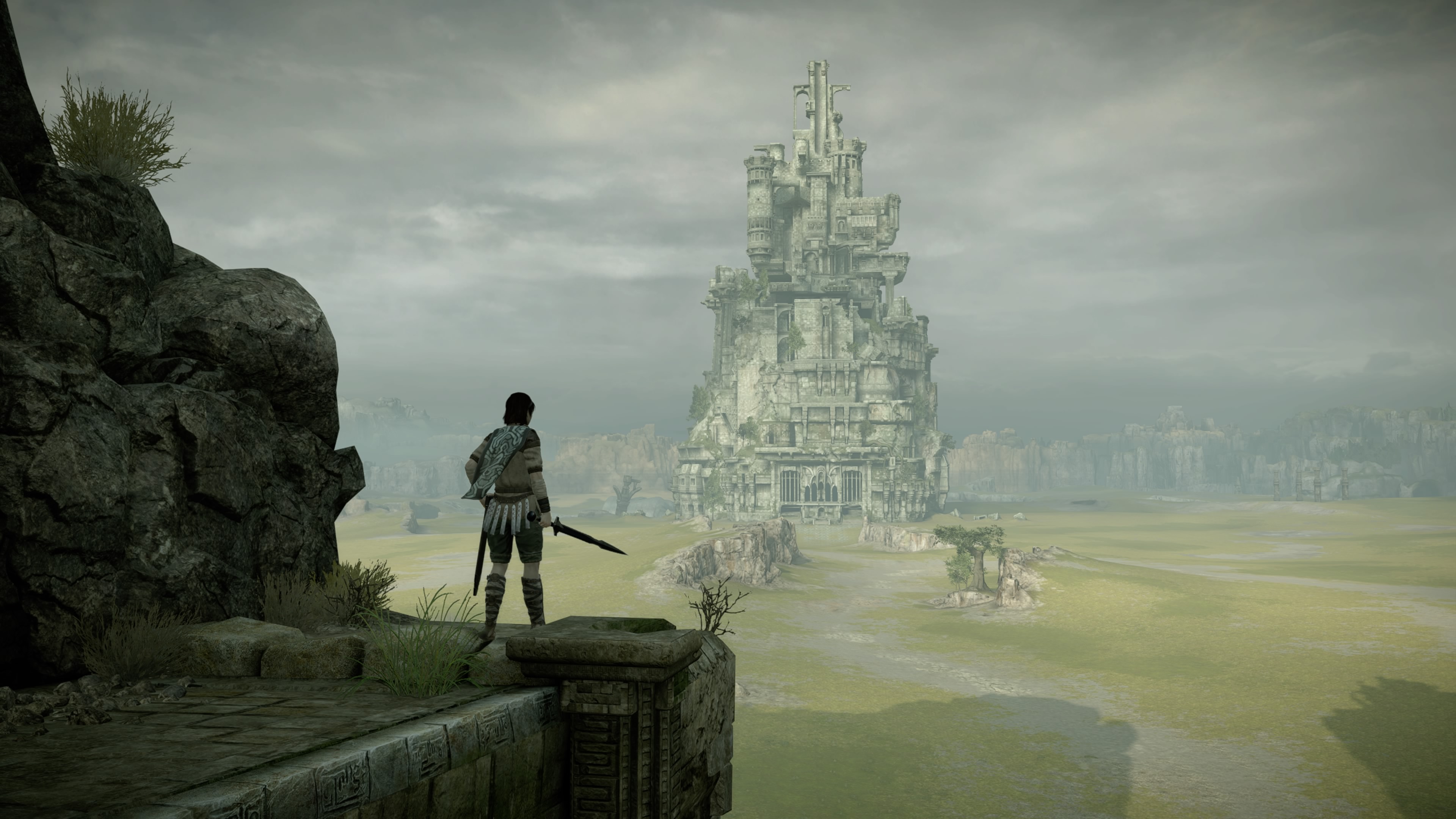 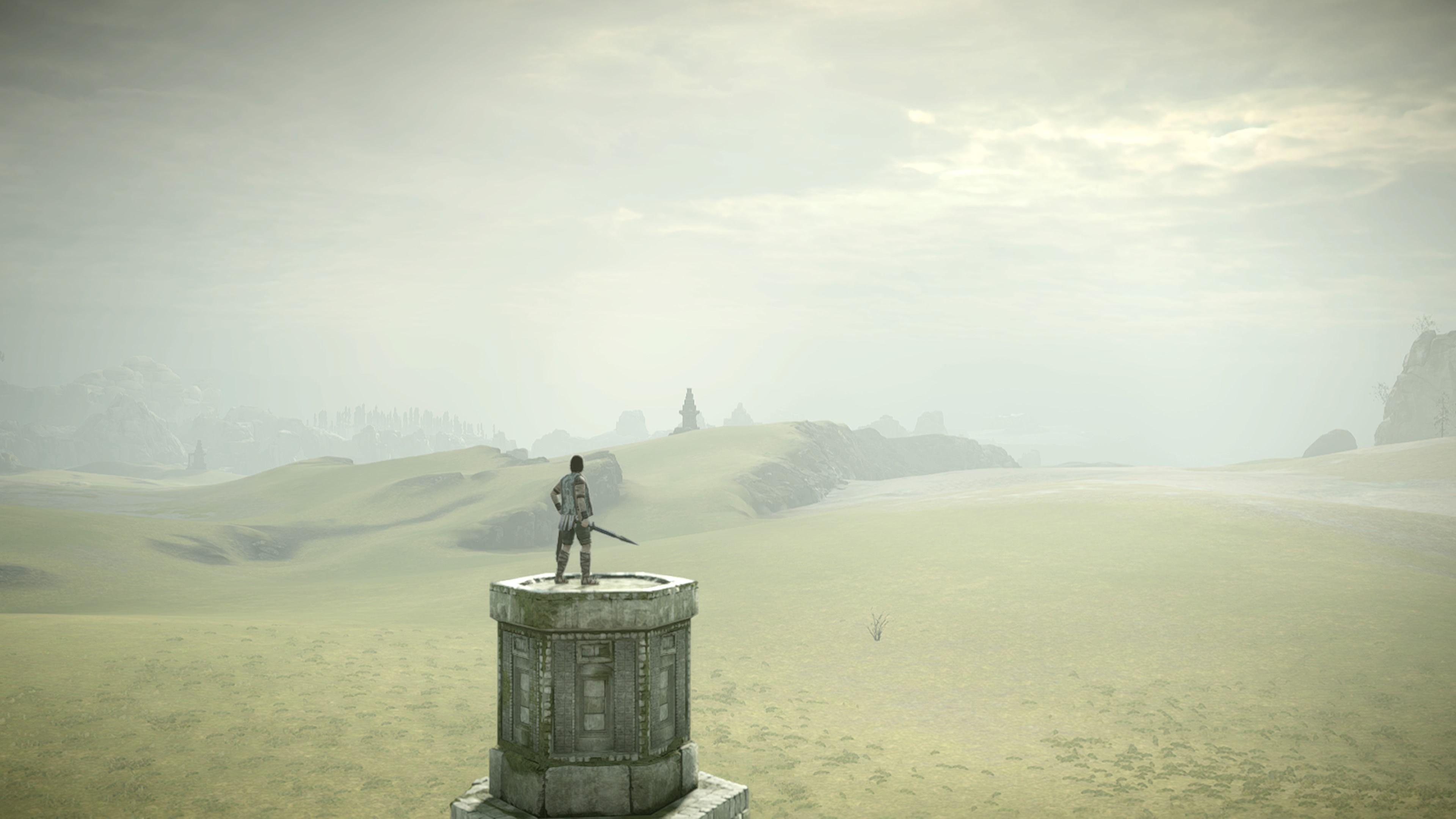 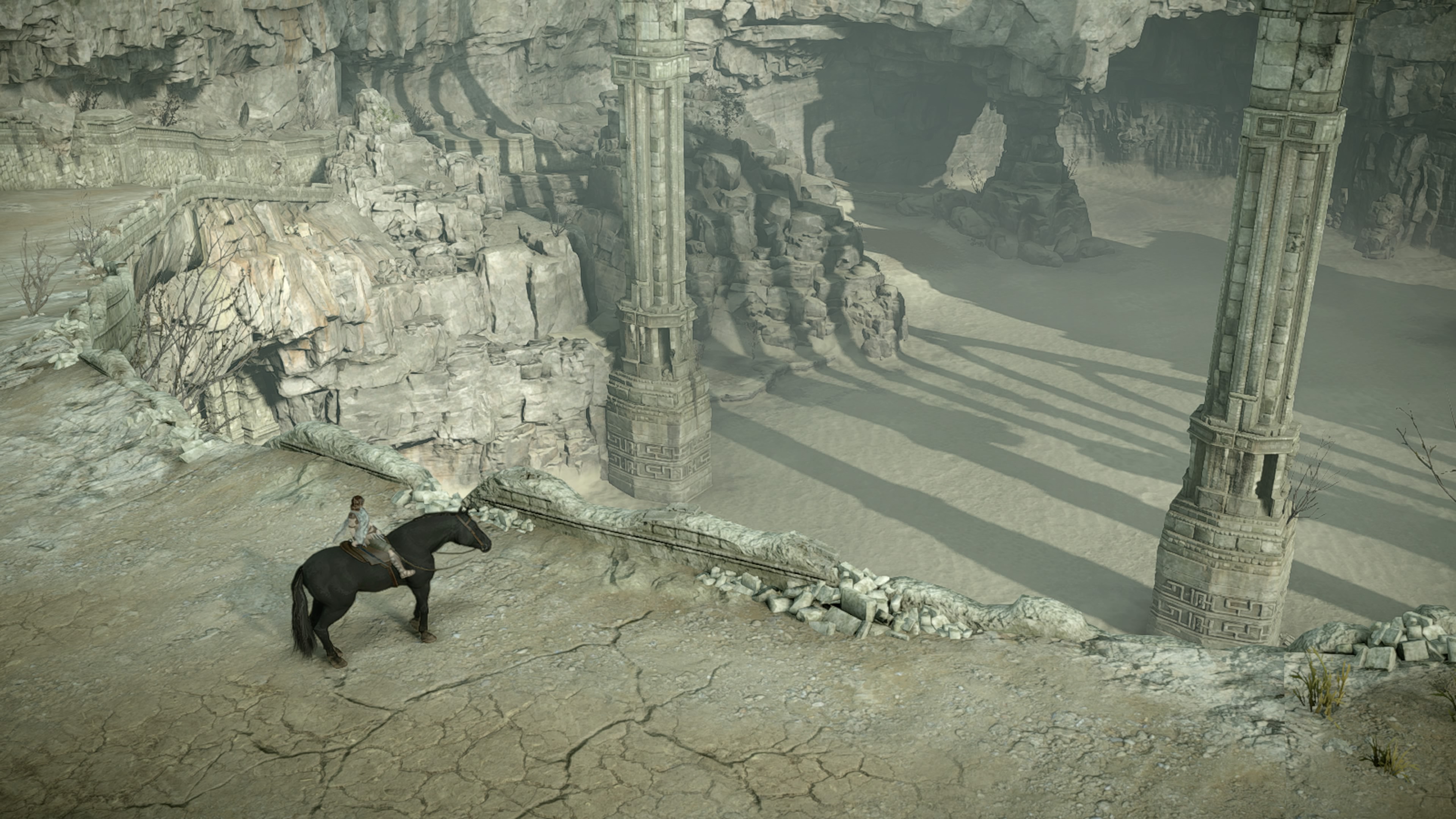 The PlayStation 2 simply didn’t have the horsepower to deliver technologies like dynamic lighting, but its inclusion on the PlayStation 4 brings the game to life in ways we’ve never seen. Light sends God Rays through the treetops, and shadows from the occasional massive building (or flying foe) casts realistic shadows on the ground below. Post-processing effects like dynamic depth of field, volumetric fog, and motion blur completes the package with a graphic parity equivalent to that of any modern AAA game. Not unlike the Uncharted series, an included photo mode lets you capture all of these incredible visuals and preserve them, complete with post-processing filters, vignette modes, and more to preserve amazing screenshots like this, this, and this. But none of it compares to the fur…

Shadow of the Colossus drops you into a gorgeous landscape with one goal in mind: kill the titular creatures in order to save the life of the mysterious woman you’ve dropped onto the nearby alter. With each battle, you’ll come closer to her revival, and to the truth. There are sixteen colossi in the game, and the key to their defeat is having the protagonist carefully climb them to stab at their weaknesses. In most cases, this means spotting where fur grows on them, taking a leap of faith. snagging a fistful of it, and then holding on for dear life. Using your limited grip strength, you’ll ascend the beasts, finding their weak points, and stabbing them into their ultimate demise. That is, you will do that eventually — but first, you’ll likely run around on top of it just marvelling at the incredible detail in every strand of hair on the beasts. Strand thickness, movement, stiffness, and how it reacts to you climbing it is all done dynamically, pushing the GPU on the PlayStation 4 hard to bring it to life in a very natural way. Each colossi is an order of magnitude higher polycount than ever before, and the hair is some of the most realistic we’ve seen in any game to date, including the likes of The Witcher III: Wild Hunt with NVIDIA’s HairFX turned all the way up. It’s simply staggering just how much of an upgrade Bluepoint has brought to the table. 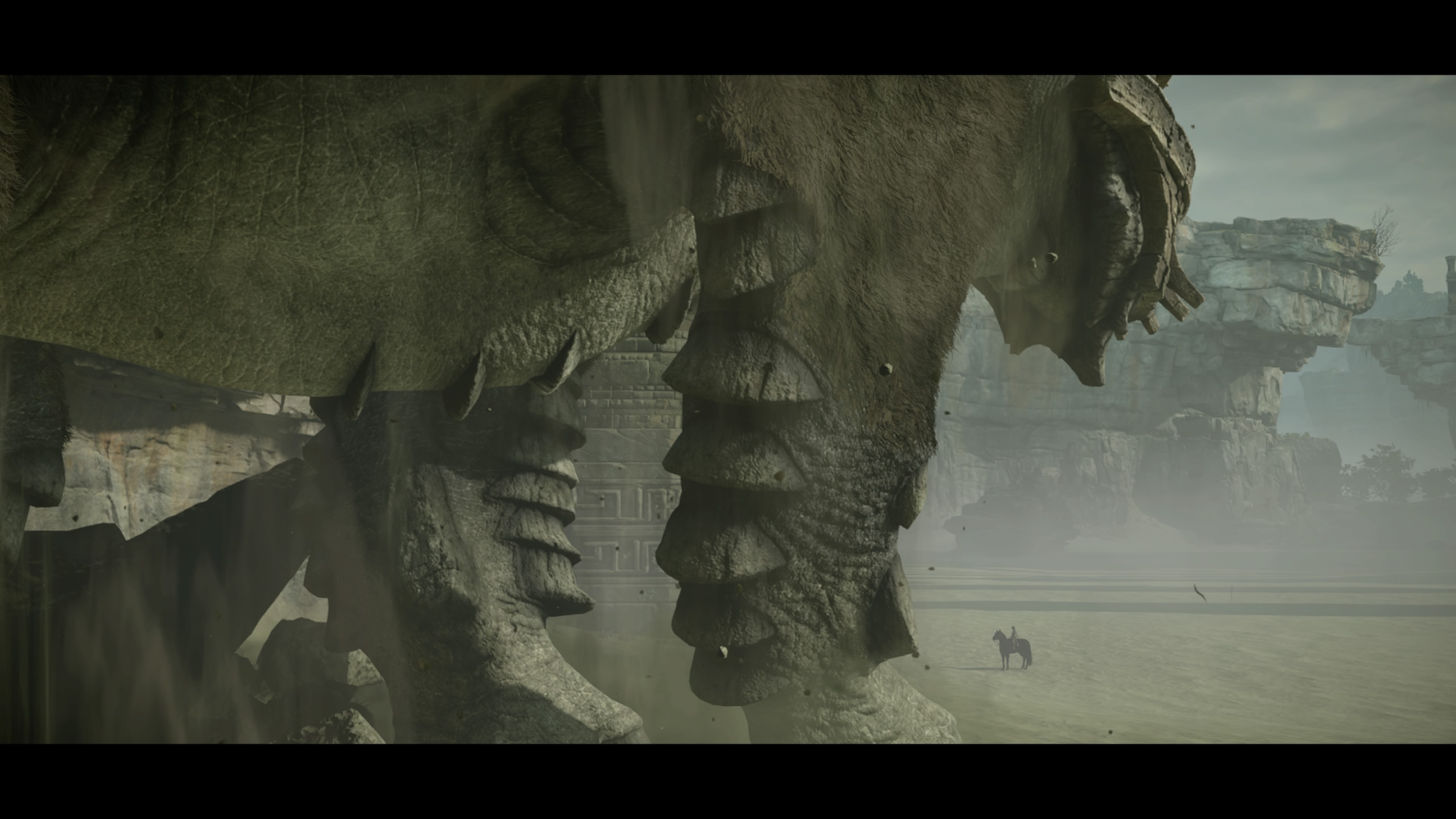 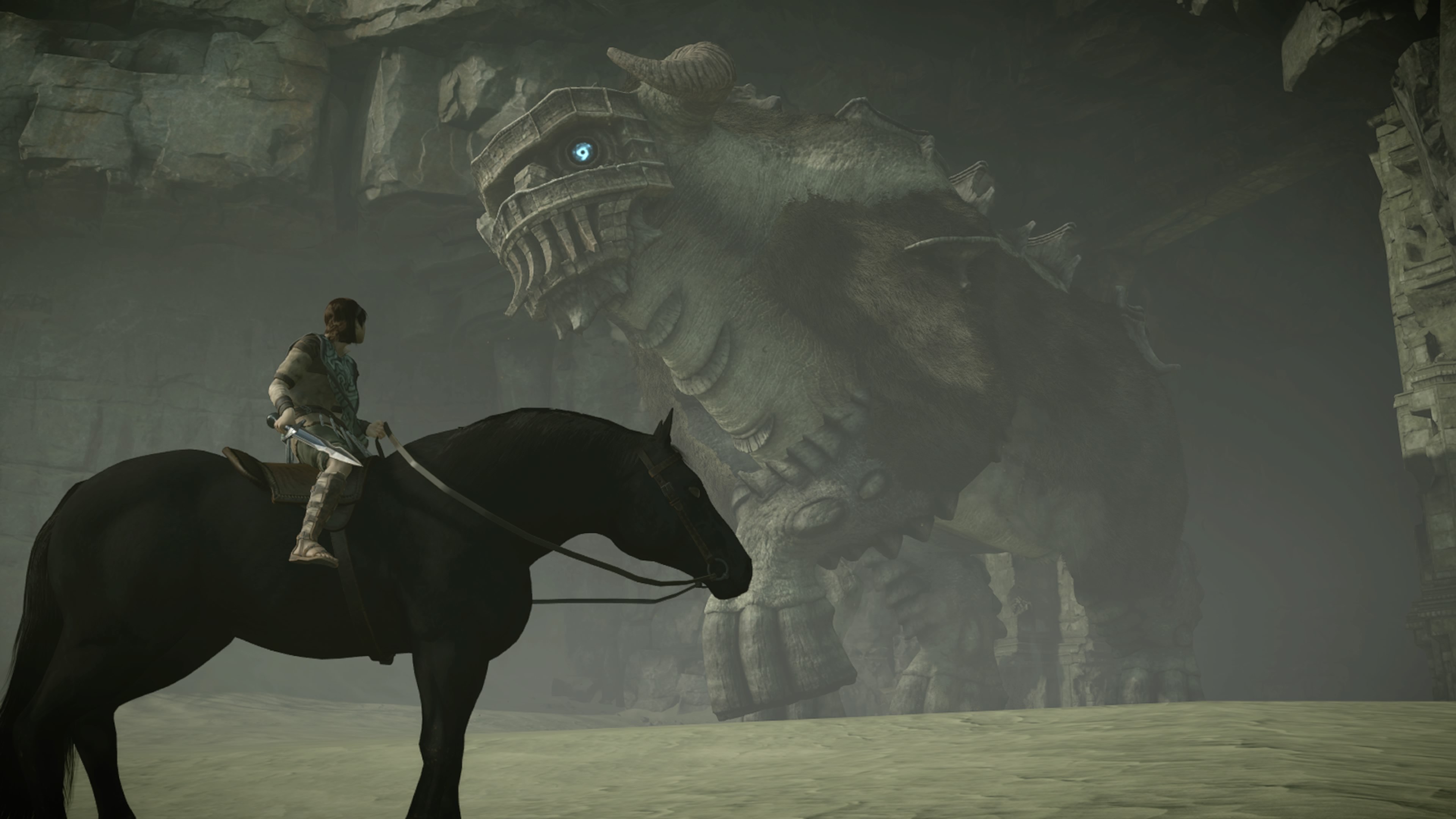 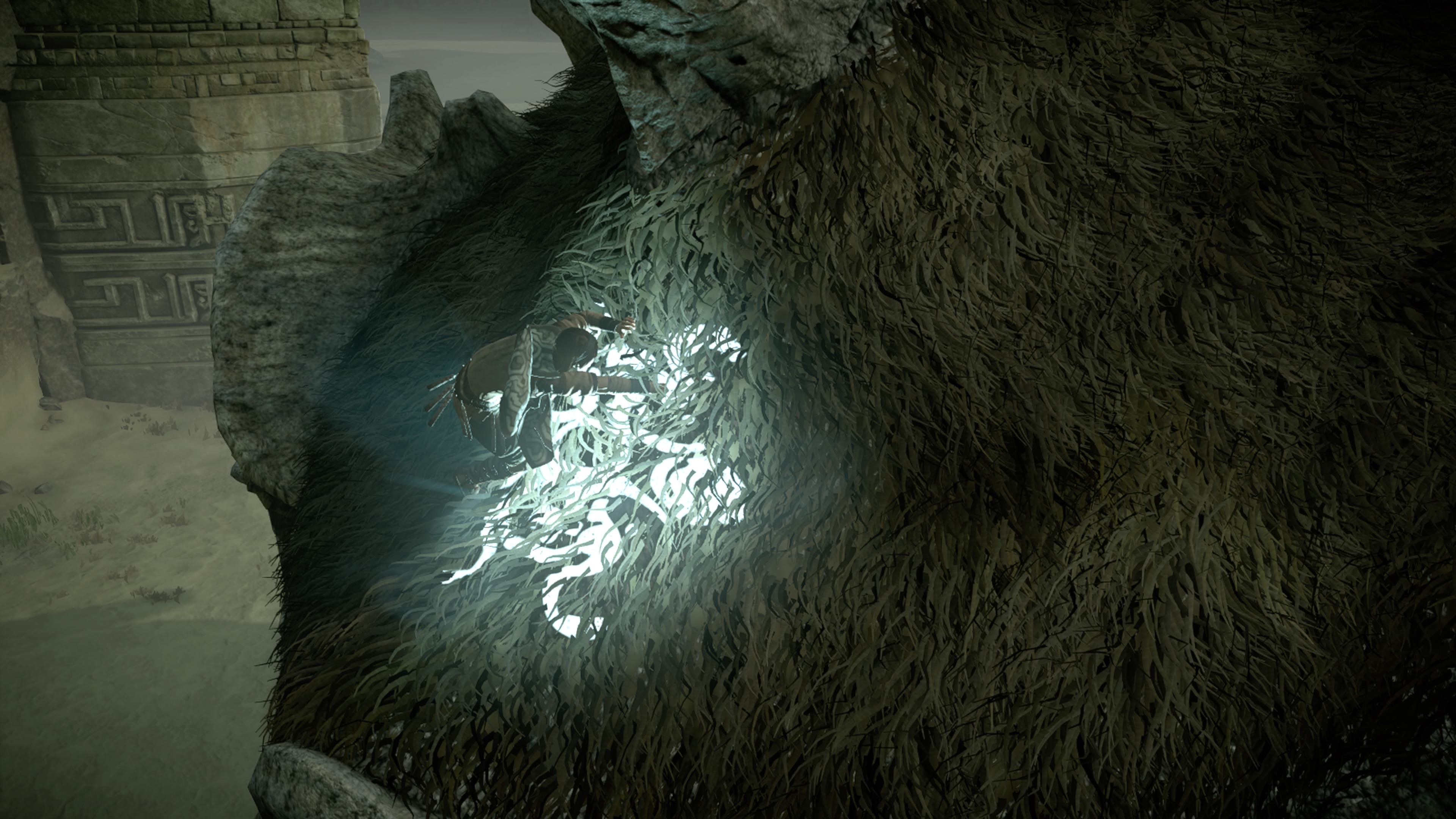 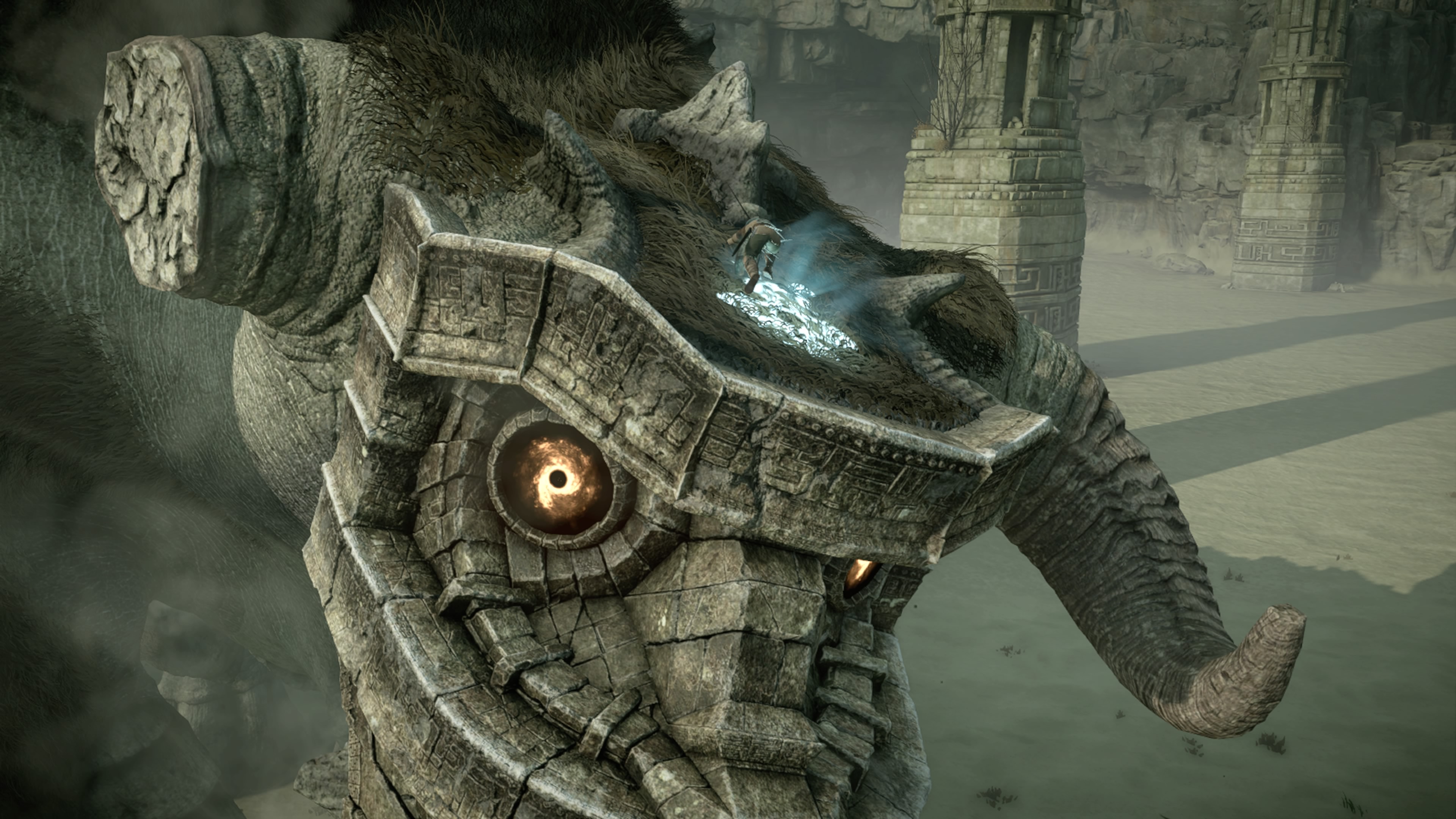 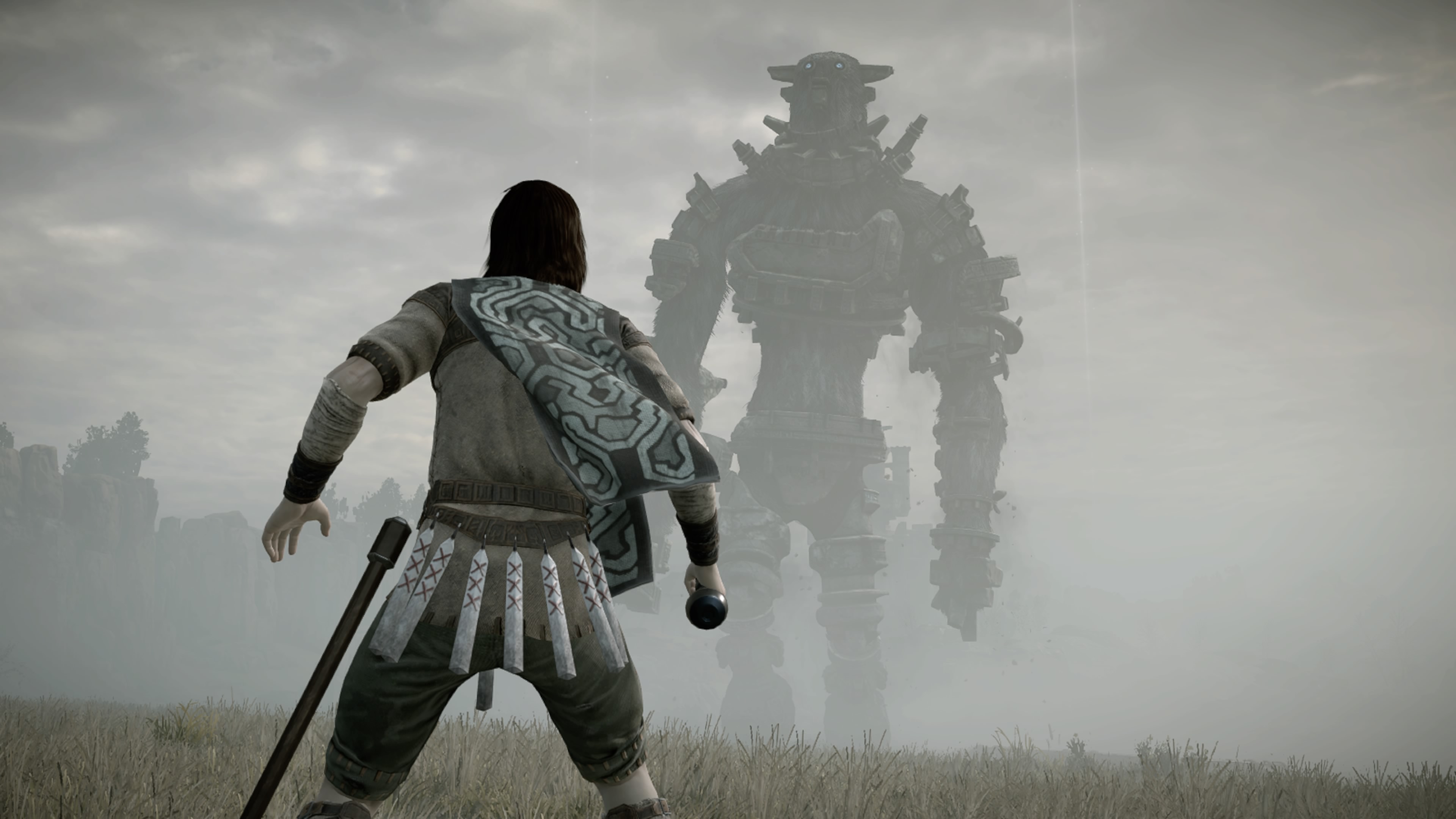 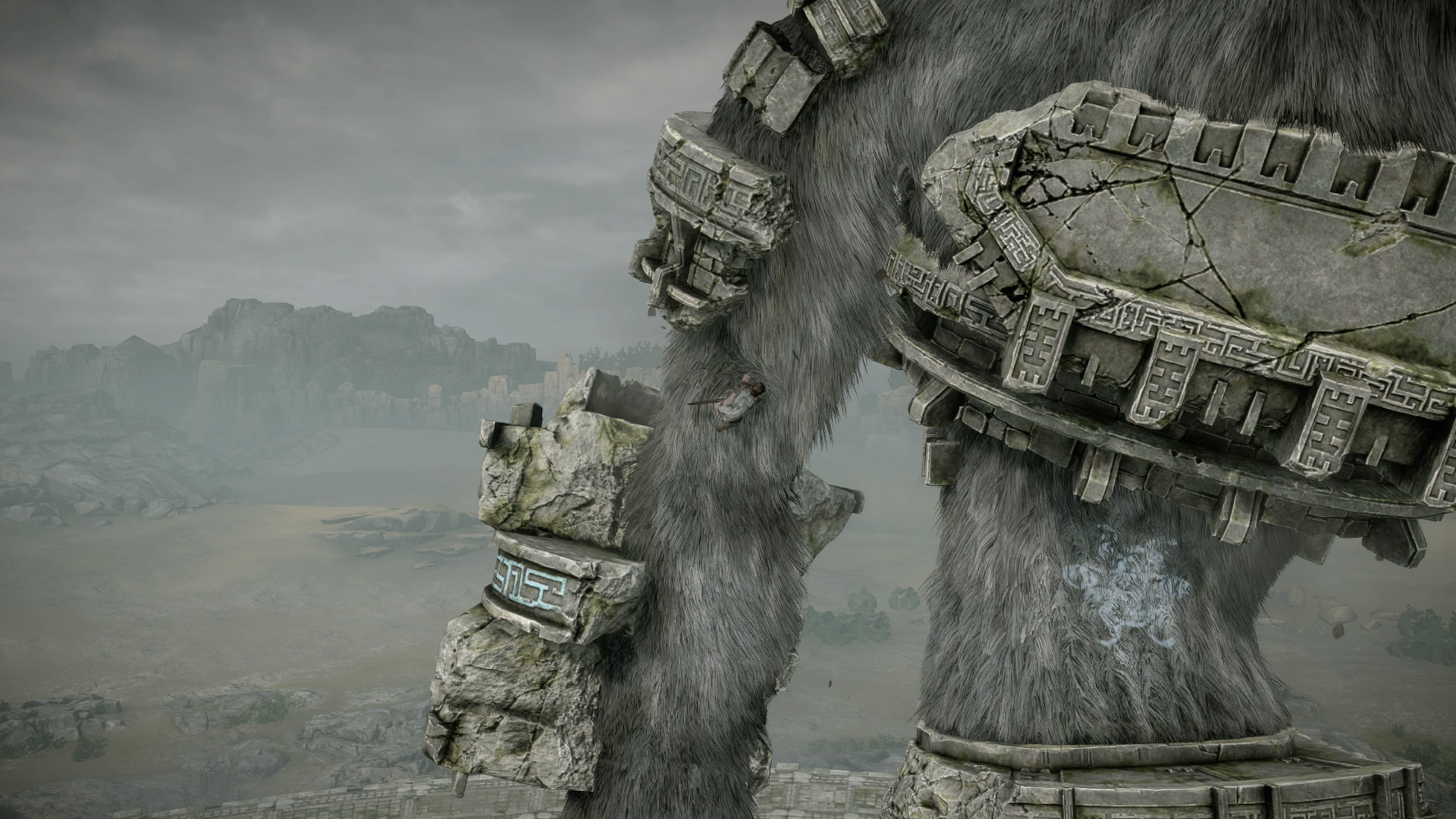 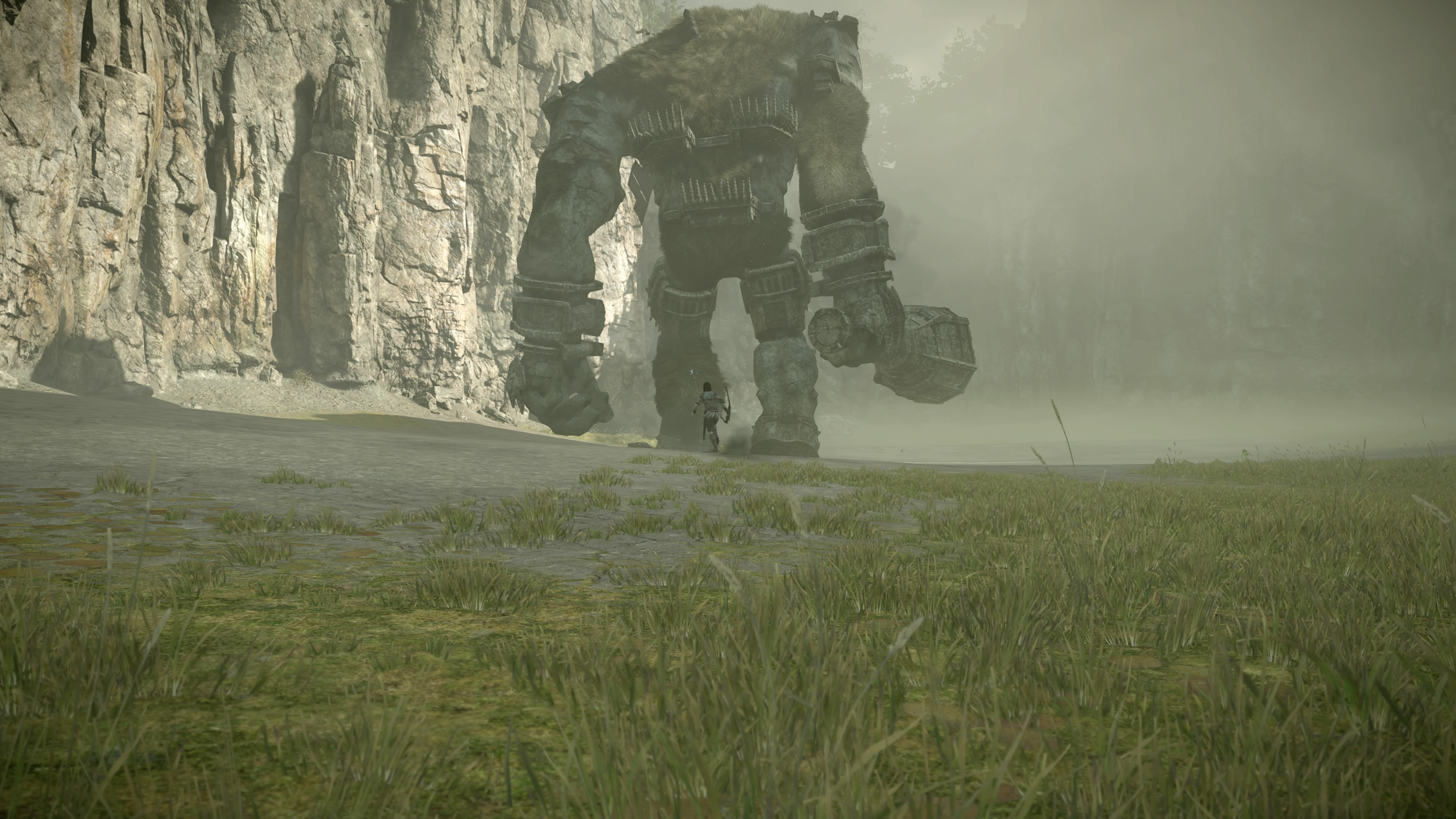 Naturally, Sony wants to push the power of their flagship console, so Bluepoint Games has provided two display modes specifically for PlayStation 4 Pro users. In Cinematic mode, the game emphasizes image quality, pushing a 4K resolution with 30 fps. The Performance setting optimizes framerate over resolution, pushing 60fps, but at 1080p resolution. If you happen to have a PlayStation 4, but haven’t yet picked up a 4K display, the game will instead supersample that 1080p image up to 1440p, providing a smooth and high-resolution result. Naturally, the game also supports HDR, so if your TV is up to the task, prepare for some gorgeous color depth.

While there are a myriad of graphical upgrades, there are a nearly equal amount of control and camera updates as well. A quick run with the PlayStation 2 original, and the PlayStation 3 remaster, reminded me of just how janky the controls really were. They were no worse than their contemporaries — they were simply a product of a different time. Bluepoint has done a fantastic job overhauling the controls (though you can choose from four schemes, including the original), buffing the rough edges, and improving nearly every aspect. I have to admit that Agro (the horse you control) still steers like a Buick with a busted axle, but it’s more manageable than the two previous attempts.

The grab mechanics are more reliable, removing the frustration I felt when playing the game’s first and second iteration. In short, it feels more fair thanks to simply being able to count on Wander’s grip when you hold the trigger. The camera can occasionally get clingy like an ex-girlfriend, zooming entirely too close to the action, but these moments are thankfully few and far between.

Shadow of the Colossus on PS4 Pro - Fighting the First Colossus

There are a number of improvements beyond the obvious surface items. Improved aiming mechanics, better jumping precision, autosave and periodic saves, a customizable HUD, and faster loading are all present on the PlayStation 4, and the PlayStation 4 Pro only makes these great new features more beautiful.

If this sounds like a bit of a love letter, that’s about right. Seeing Fumito Ueda’s vision carefully curated like this, the atmosphere, look, and feel all massaged to perfection, it’s hard not to fawn over it a bit. Few games age this well, but Bluepoints steadfast devotion to absolutely nailing every detail.

Shadow of the Colossus

With production value equal to any first party AAA game, Shadow of the Colossus is a technical masterpiece. This is the new benchmark for what a remaster should look like, standing as the best remaster ever released on any platform. Put simply -- this is how it’s done.

Ron Burke is the Editor in Chief for Gaming Trend. Currently living in Fort Worth, Texas, Ron is an old-school gamer who enjoys CRPGs, action/adventure, platformers, music games, and has recently gotten into tabletop gaming. Ron is also a fourth degree black belt, with a Master's rank in Matsumura Seito Shōrin-ryū, Moo Duk Kwan Tang Soo Do, Universal Tang Soo Do Alliance, and International Tang Soo Do Federation. He also holds ranks in several other styles in his search to be a well-rounded fighter. Ron has been married to Gaming Trend Editor, Laura Burke, for 21 years. They have three dogs - Pazuzu (Irish Terrier), Atë, and Calliope (both Australian Kelpie/Pit Bull mixes).
Related Articles: Let's Play, Shadow of the Colossus
Share
Tweet
Share
Submit

A Plague Tale: Requiem hands-on preview – Quite the tail to be told

Cobra Kai 2: Dojos Rising kicks its way onto PC and consoles this fall

Ooblets review — You may now lick the reconstitooter