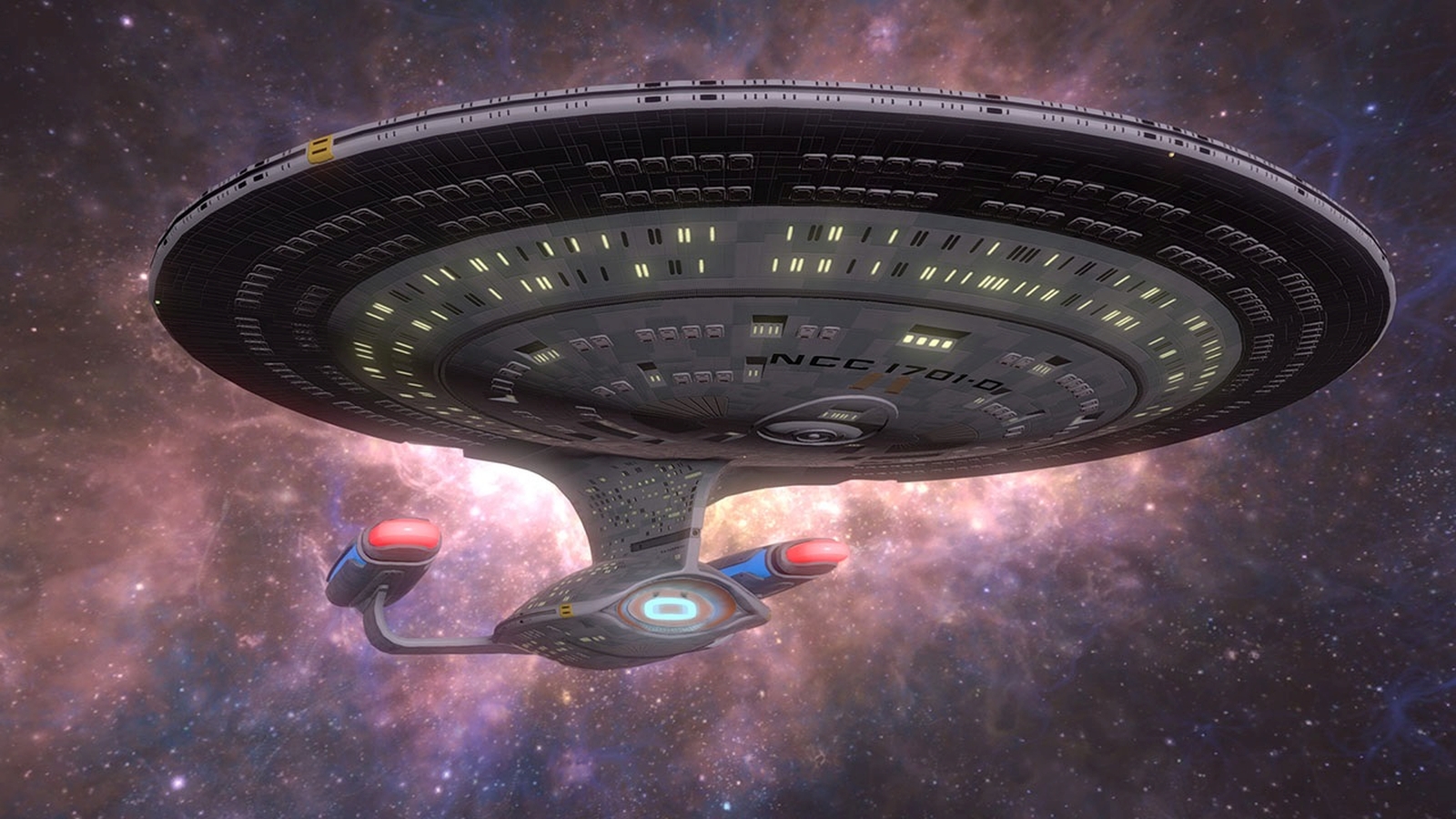 I grew up watching Star Trek. I slogged through the hammy three season original series, sure, but it was Star Trek: The Next Generation that got me hooked. It is the first and only syndicated television series ever to be nominated for a Primetime Emmy Award for Outstanding Drama Series, picking up nineteen Emmy Awards, two Hugo Awards, five Saturn Awards, and even a Peabody in its seven seasons of airtime. Set 78 years after the original, it featured the memorable U.S.S. Enterprise NCC-1701D bridge, a parade of new characters, and some of the best foes in Sci-Fi. Ubisoft must agree with me as their latest expansion to the fantastic Star Trek: Bridge Crew (our review with more than 2 hours of video!) puts us back on the deck of the Enterprise, and I couldn’t be more excited.

Since this game is exclusive to the PlayStation 4 and PSVR (launching on May 22nd) until it is released on Rift and Vive on July 21st, I’ve had to assemble a new crew with Sony HMDs. Your Command Staff for this review is Managing Editor Mike Dunn, Editor Austin Fern, Editor Laura Burke, and your ship’s Captain, Ron Burke. (It’s starting to feel like The Orville around here…)

One of the first additions to The Next Generation’s DLC is a brand new race — you can now select Human, Vulcan, or Android. This new selectable Soong-style Android race offers masculine and feminine options, as well as five face types, and four sets of sliders to make slight adjustments to the final look of your character. It’s fairly similar to what we had before, though you can’t change hair styles, but now you can build your own Data-esque character to man a station on the bridge.

In addition to the new character race, you’ll also have a new role on the bridge — Operations. The Engineer in Bridge Crew is responsible for power levels, cross-connecting power between subsystems, and preparing the ship for warp. The new Operations role tackles much of these same activities, but will also now manage crew assignments across ten sections of the ship — thruster control, shield generator, main engineering, torpedoes, transporter room, computer core, phaser control, scanners, astrophysics lab, and sickbay. This is accomplished via a cross-section of the Enterprise, allowing the player to assign crew members to perform various functions like phaser control for more precise hits, faster reload speeds, better cloaking detection, repairs, and much more. If you are wondering about the sickbay, it all hinges on the fact that your crew is a finite resource. If one of your unseen crew members is injured, they can be sent to sickbay to recover, because, if they die, they are not replaced until the end of your mission. To help get your people in the right places, they are color coded to their job function. Red uniforms are Command (not just marked for death), Yellow or gold is reserved for Operations, and Blue are scientists. This helps you place the right resource in the right place, though any warm body will do when the chips are down, albeit not as efficiently. Keep in mind that these are not sliders, but human beings, so they’ll have to travel to their new station — planning ahead and staging your teams is key.

The new Operations role isn’t the only station that received some attention — several new functions have appeared for all roles. As an example, the Enterprise D can fire phasers and photon torpedoes from fore and aft, and that’s been added here. Additionally, they can be set to home in on their target, or be used as a proximity mine (as seen in three episodes of Star Trek: Voyager – yes I’m a dork). Similarly, the helm has been upgraded to the LCARS-based system, including the Aegis’ chrome and physical throttle control which has been replaced with the Enterprise D’s touch-based slider.

Unfortunately, there is one hull breach in Bridge Crew — The Next Generation: they didn’t update the training module. This means you won’t be able to learn the new job role in the holodeck simulator, or learn how the new LCARS layout functions work. Instead, you’ll have to learn these in the field when it’s the most dangerous. This seems like a bit of an oversight, given the added challenge the new Operations role brings.

“We are the Borg — resistance is futile”

Easily the most formidable addition to Star Trek: Bridge Crew is the Borg. Nigh-unstoppable, these emotionless killing machines relentlessly pursue you in the new mode called “Resistance”. In this mission type, the crew joins the action being tirelessly pursued by a massive Borg Cube. Engaging head-on is suicide, so players must collect three prototype ship upgrades before they’ll stand any chance at taking out the polygonal death machine.

Our ill-fated mission began with a quick warp to recover the first prototype. Austin, having never seen the Borg (or Star Trek for that matter, the heathen), found their Borg Cube to be hilarious, but Mike and I knew to run. Forcing the Cube into a regeneration cycle with concentrated fire, we bought some time and escaped to our first destination. A pirate had just made off with the prototype, so we gunned his shields and hull to nearly zero, forcing his surrender. He ejected the device and we promptly finished him off — I am not a merciful Captain. As the Borg closed in for a second time, we warped to a new system and found similar circumstances. A cargo ship had made off with the device we needed. We took the same approach as before, but accidentally force fed him too many torpedoes, destroying his ship and the prototype. Thankfully, these things are somewhat readily available — my Lt. Commander gave me new coordinates of a similar weapon chunk. Zipping off to this third location, we were met by the Borg Cube fairly quickly and found ourselves on the losing end of multiple incoming laser blasts. Mike did his best on the Operations station, but the crew members simply couldn’t keep up with the damage. The Enterprise D went up in a series of explosions in the darkness of space — we were humanity’s last hope, and our screams are now lost among the stars.

In addition to the Borg, you’ll also have to contend with the Romulans. The first thing we noticed was that these new ships were faster, heartier, and could use cloaking far better than their Klingon counterparts. They will even target specific parts of the Enterprise in an attempt to disable her, something only afforded to the players in the previous iteration of Bridge Crew.

The area where you’ll encounter Romulans and their enhanced combat tactics is in the second new mode entitled “Patrol”. Patrol helps improve the randomized mission structure beyond the “Ongoing Missions” mode, instead freeing you to simply roam about and encounter randomized points of interest. NPCs will offer you objectives at those interest points, but it’s up to you whether or not you want to take those missions on, leaving the flow of gameplay in the hands of the players. Better still, Patrol’s lack of defined mission structure means you play until you die or want to stop — the pace is up to you. Below you can join us for a quick Patrol mission — enjoy!

Naturally, the game will feature the same cross-platform play between PSVR, HTC Vive, and Oculus Rift when it is released on the latter two platforms. Look for our continuing missions as we re-assemble the original review crew and boldly go where quite a few people went before due to timed exclusives.

It’s very clear to me that the Red Storm team loves this property, and went to great lengths to replicate (ha!) the look and feel of the Starship Enterprise from The Next Generation. The LCARS sounds precisely as it did on the show, and everything seems to be exactly where you saw or imagined it to be across all 178 episodes of the second iteration of Star Trek.

Just as fun and exciting as the previous outing, The Next Generation re-invigorates the game with a fresh bridge, a new race, and a new role -- Operations. While an updated training module might have been helpful, everything else about this DLC is ship-shape and ready to engage. Could this open up more DLC from shows like Enterprise, DS-9, or even Discovery? Please, Red Storm...make it so!

Ron Burke is the Editor in Chief for Gaming Trend. Currently living in Fort Worth, Texas, Ron is an old-school gamer who enjoys CRPGs, action/adventure, platformers, music games, and has recently gotten into tabletop gaming. Ron is also a fourth degree black belt, with a Master's rank in Matsumura Seito Shōrin-ryū, Moo Duk Kwan Tang Soo Do, Universal Tang Soo Do Alliance, and International Tang Soo Do Federation. He also holds ranks in several other styles in his search to be a well-rounded fighter. Ron has been married to Gaming Trend Editor, Laura Burke, for 21 years. They have three dogs - Pazuzu (Irish Terrier), Atë, and Calliope (both Australian Kelpie/Pit Bull mixes).
Related Articles: Let's Play, Star Trek Bridge Crew -- The Next Generation, VR
Share
Tweet
Share
Submit