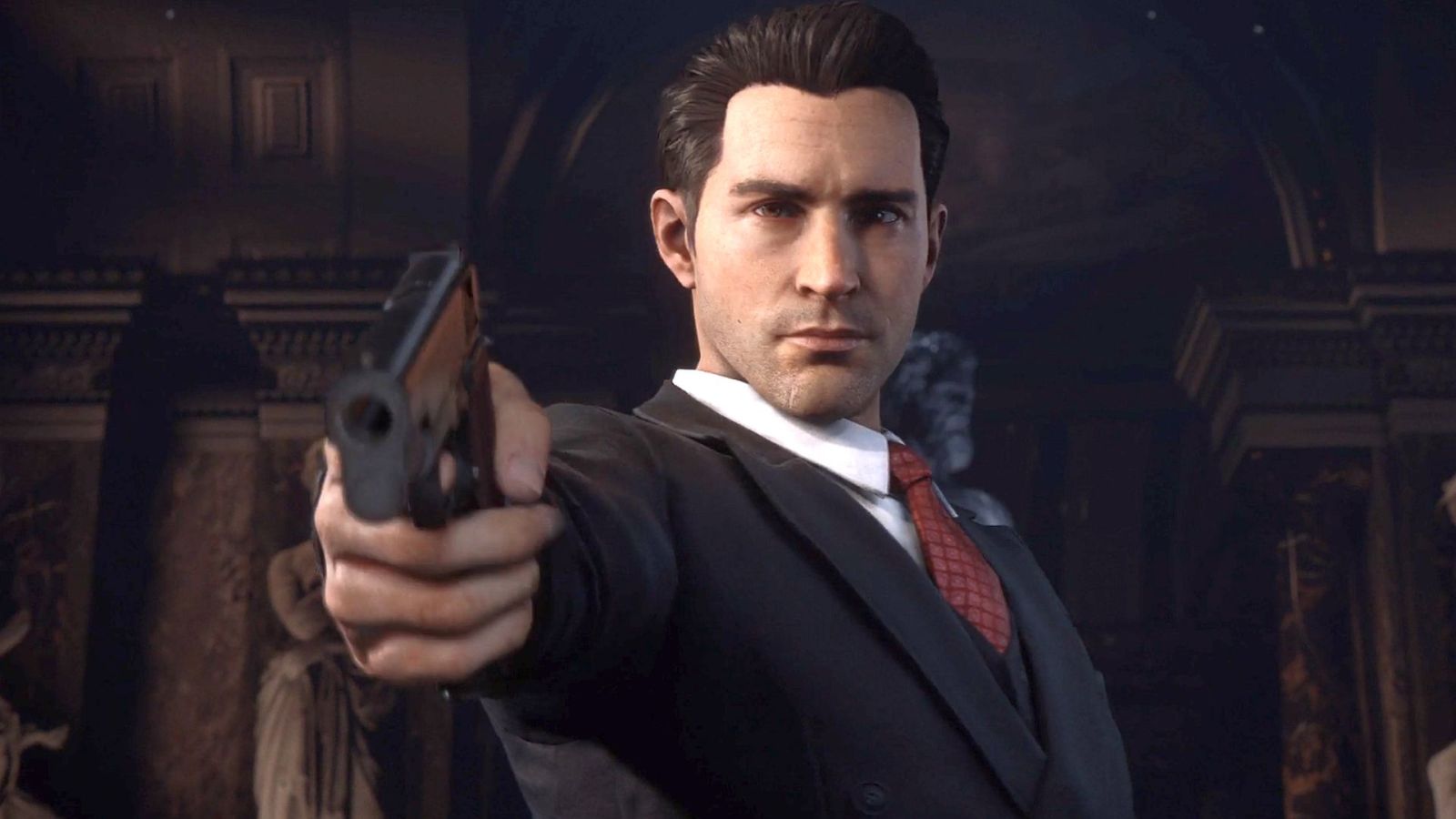 There has been a lot of discussion on what constitutes a remaster nowadays, but there are a few games that raise the bar to the point where they could be considered a completely new product as the rework is so complete. It’s in that way that Mafia’s remaster lives up to its name — Mafia: Definitive Edition.

For those of you who didn’t play the 2002 version of this game, Mafia takes place in the 1930s. A young Tommy Angelo is down on his luck, taking a job as a cabbie. When he finds himself having to act as a getaway driver for two members of the Salieri crime family, Tommy ends up finding more permanent, albeit dangerous, work as a made man. As rival mob boss Don Morello and his family rises to power, they begin to clash with the Salieri clan, culminating in an all-out war between the two.

When we reviewed the game back in 2002, one of the things we loved most was the strength of the writing. I’m happy to say that developer Hangar 13 has lovingly approached the rebuild of this fantastic element with the utmost care. Every cutscene has been redone with motion capture, and every line was re-examined and carefully crafted to match the serious tone of the game. To say they succeeded would be an incredible understatement.

For a number of reasons, the original cast was unavailable to re-record their lines for Mafia: Definitive Edition. As such, the team at Hangar 13 assembled a new all-star cast to bring this game to life once again. Since the team has taken a careful approach to the story, upgrading elements, and expanding character moments, there are quite a few new beats to the growth of each character. Nowhere is that more true than Sarah.

Just as in the original story, Sarah represents Tommy’s love interest, but in this remake, we get a far better look at why he loves her, and why it’s so crucial to protect her. I felt like she was a bit sidelined in the original, but here she’s front and center and arguably one of the most dynamic members of the cast. This is equally as true for the people around Tommy. Paulie, Frank, and the others now seem more familial, and certainly more nuanced in their performances. Instead of generic loose canons and single-dimensional mobsters, these guys now seem like people who have weathered incredible storms and shared more than a few moments together. While I’ll miss the likes of Michael Sorvino as Tommy or George DiCenzo (RIP) as Salieri, the new cast does a magnificent job with TV and movie veteran Andrew Bonjourno at the helm as Tommy to lead the pack.

It isn’t just a new voice cast that brings the story to life in Mafia: Definitive Edition, but a complete overhaul of every pixel of the game. Cutscenes are a big part of what hooks you in a cinema verite type noir crime story, and as such, all of them have been rebuilt from scratch using VOCAP. This makes them feel more believable and impactful. Seeing Paulie’s deadpan look when he’s truly pissed off, with the slightest of eye twitches letting you know that he means business. conveys more than the rebuilt script and voice acting could deliver alone. This combined with fresh animations for the world outside of cutscenes brings Mafia to modern standards.

When Mafia came out in 2002 it was fairly cutting edge, but now 18 years later the system specs for that game are simply laughable — we have more computing power in our phones than what was needed at the time. As a result, while the game was fun, it was also very limited in many ways. The world was large, but devoid of life. The game supported driving, but the street grid was nonsensical and confusing. The game looked great for 2002, but playing it now requires a great deal of imagination and a lot of tolerance for near-distance pop-in. These were the beginnings of semi-open world 3D games, and it shows. Fast forward to today and in many ways, this is a whole new game.

Hangar 13 (who built Mafia III — you can read our review here) dug deep for Mafia: Definitive Edition. Every art asset in the entire game has received a complete overhaul. Realtime lighting and reflections, high-resolution textures that look fantastic in 4K, fresh character models, and buildings that have dimension just scratch the surface of what’s on offer here. The city of Lost Heaven (which seems to be a blend of New York and Chicago in the 1930s) is teeming with people, cars, landmarks, and more, making it feel like a living, breathing world. Traffic flow has been improved dramatically, with streets being a little wider and more logical. Better still, once you’ve loaded into the open world, there isn’t a loading screen bifurcating the city and the country — you can take that long drive without a long pause in the middle, unlike the original.

Mafia’s original release was removed from Steam in 2012, returning to Good Old Games two years later, but absent its fantastic soundtrack. The team at Hangar 13 has brought the entire soundtrack back, as well as adding tracks from greats like Duke Ellington, Django Reinhardt, Cab Calloway, and even a track from the best cornet and trumpet player in the biz, Louis Armstrong. In all, there are 35 period-correct songs in the game, helping to keep the soundtrack fresh and minimally repetitive. There are also a variety of news reports and ad campaigns selling various products that raise the worldbuilding nicely.

After a few missions, you’ll gain access to a garage to store vehicles. In there you’ll find every ride you’ve ever commandeered ready for use. You’ll also find a brand new period-accurate motorcycle — a fresh addition to the roster. I’m not sure if it’s because I own Mafia III, but I also found Lincoln Clay’s Samson Drifter — a fictional car resembling a 1970 Ford Torino GT. Obviously, this doesn’t belong in the 30s or 40s, but it will easily break every traffic law in the game, but thankfully the police are a little more merciful in this version of Mafia versus the original.

Speaking of driving, if you played the original there is likely a specific mission that drove you nuts. During one outing Tommy has to steal a race car, take it to a garage to get a little sabotage work, and then drive it back to the garage. The controls for driving were already a nightmare at low speeds and made worse at high speeds. Yes, this mission is still in the game (with a longer scene for Sarah when you win), but the driving controls received a massive overhaul. Whether it’s evading the police or driving this sputtering race car back to the garage, you won’t be fighting the controls to do it.

One of the challenges with the gunplay in the original Mafia is the lack of a cover system. Running around without the ability to use objects as cover made the game incredibly difficult. Thankfully, the cover engine used in the third game has made its way to Mafia: Definitive Edition, and the game feels a lot more modern as a result. Similar to the racecar mission, there is an outing where you’ll need to break into a house to steal something from a safe. Dropping bodyguards quietly, but being unable to move the bodies in the original, presented an opportunity for enemies to stumble on the results. In this version, we can finally pick up bodies and drag them to the dark and secluded parts of the maze to keep this stealth mission stealthy. It’s not a mechanic you’ll use often, but when you need it, it works perfectly.

While the original game would run on a pocket calculator nowadays, the definitive edition, despite looking absolutely phenomenal, has remarkably low system requirements. Let’s take a closer look:

I’m shocked to see that only a GTX 660 is required as that card was released in 2012. To get all of the bells and whistles you’ll need something a little beefier, but these specs are fairly reasonable, with the amount of dedicated VRAM being the largest driver of performance.

It’s not all sunshine and roses in Lost Heaven, unfortunately. There is a persistent bug with the camera that manifests itself at the worst moments. Whether I was using the mouse or a controller, the camera would drift behind my vehicle to the point where I couldn’t see anything in front of me. Similarly, unless I constantly “feathered” the thumbstick back into position, the camera would work it’s way out of position until I was nearly looking straight up at the sky. It requires constant attention, and this can be a royal pain while pursuing a target in a vehicle. It’s likely something that can be patched soon, but that doesn’t make it less irritating until that is done.

There are also a handful of physics-related bugs where you’ll see guns floating in the air, or the occasional piece of the environment levitate. These aren’t frequent, thankfully, but they are immersion-breaking in an otherwise highly-immersive game.
All in, (including the returning Free Ride mode which lets you play many of the campaign’s mechanics in an open world environment) you can easily spend more than two dozen hours with the game. Where Mafia III had repetitive fetch missions as filler, Mafia: Definitive Edition feels tight and well-crafted — easily Hangar 13’s best work so far. It doesn’t overstay its welcome, and it capitalizes on the roots of the original while modernizing every aspect. It’s a technical triumph, as well as a massive step forward for an already amazing original. At a time when weak-tea remakes are all the rage, Mafia: Definitive Edition shows what it is to deliver the goods properly.

Hangar 13 has retouched every single aspect of the original Mafia, expanding the story, refining the gameplay, and wrapping it with an absolutely phenomenal new look and sound, elevating it to an entirely new and modern level. It’s good to be part of the family once more.

Ron Burke is the Editor in Chief for Gaming Trend. Currently living in Fort Worth, Texas, Ron is an old-school gamer who enjoys CRPGs, action/adventure, platformers, music games, and has recently gotten into tabletop gaming. Ron is also a fourth degree black belt, with a Master's rank in Matsumura Seito Shōrin-ryū, Moo Duk Kwan Tang Soo Do, Universal Tang Soo Do Alliance, and International Tang Soo Do Federation. He also holds ranks in several other styles in his search to be a well-rounded fighter. Ron has been married to Gaming Trend Editor, Laura Burke, for 21 years. They have three dogs - Pazuzu (Irish Terrier), Atë, and Calliope (both Australian Kelpie/Pit Bull mixes).
Related Articles: Let's Play, Mafia: Definitive Edition
Share
Tweet
Share
Submit