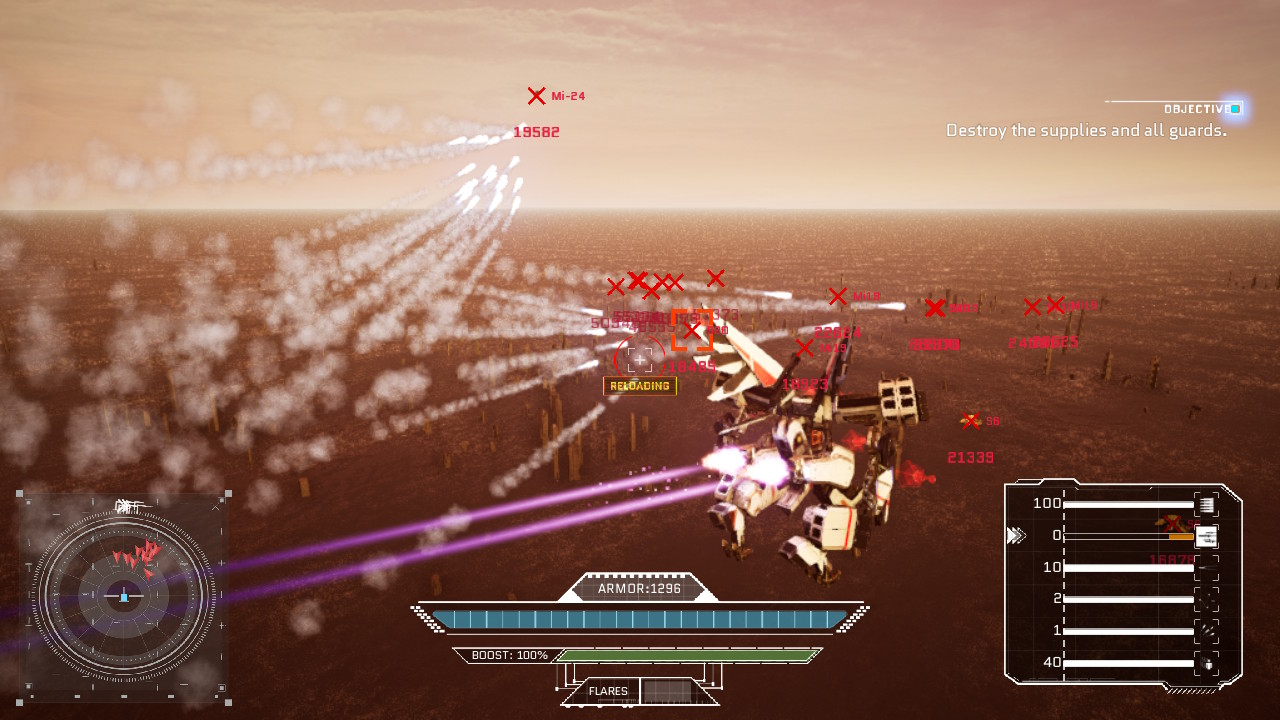 High-profile games like Battletech and Daemon X Machina are a welcome sight for mech fans who’ve gone too long with a big stompy robot game, but between the blockbusters, you need some solid smaller hits to keep the genre alive. 2017’s Brigador filled that gap for fans of tough, tactical combat, and Project Nimbus could do it for players who like their mechs fast and flashy. Originally released in 2017 on PC, it’s now made its way to the Nintendo Switch with Project Nimbus: Complete Edition.

Completely on the opposite end of games like Battletech, which dive into deep simulation of their mechs’ structure and systems, Project Nimbus turns its robots into physics-defying, airborne weapons. Aside from monitoring your ammo and boost gauge, there’s really nothing restricting how hard you push your machine and how recklessly you operate it. These are the kinds of mechs that can change directions on a dime and come equipped with particle cannons and laser swords alongside their missiles and machine guns. 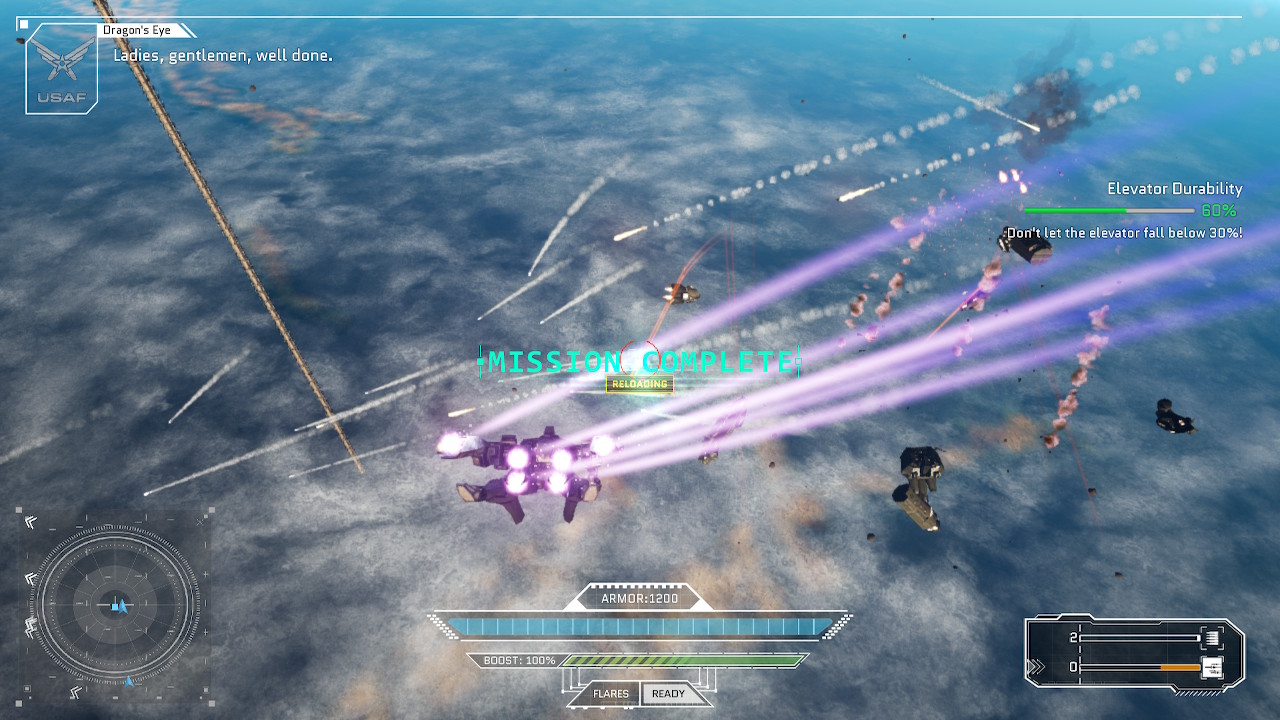 Project Nimbus is all about combat. By that I mean, fighting is about all there is to do in the game, which is both a strength and a weakness. Each mission starts, usually after a short cutscene, with your mech floating high above the Earth ready to take on dozens of enemies. Sometimes, you’re already under attack by the time the mission’s name fades from your screen. The levels themselves are completely uninteresting; most of the time, it’s just a bit of ground clutter for you to fly above. There is some variety to the missions, which might task you with flying under the radar to destroy a hidden base, defending a crucial piece of infrastructure, or escorting an unarmed ally, but it always boils down to shooting down lots and lots of mechs. As you would imagine, that makes Project Nimbus feel extremely repetitive. It never really shakes up the formula, no matter how many different ways it dresses up what you’re doing, and even within missions themselves, some of them simply have you fighting off waves of baddies for so long that I started to feel fatigued.

Fortunately, combat in Project Nimbus feels great. There was a solid hour at the beginning where I had absolutely no idea what was happening in combat, but once it clicked, I didn’t want to put the game down. Combat is extremely fast — bewilderingly so at first — and you have plenty of tools at your disposal to take down your enemies. You’ll constantly be switching between short- and long-range weapons and defensive gadgets while trying to outmaneuver other pilots. It can be completely overwhelming at times, and during some of the most hectic moments, I had to resort to firing blindly while just trying to evade the rain of gunfire coming at me. In both those moments and the ones where I felt more in control, I always felt like the game had given me all the armaments I needed to get through; it was just up to me to figure out how to use them. By default, you play from a third-person perspective, but you can switch to first-person for a more immersive (and more disorienting) experience. Most missions set you against a swarm of nameless foes, but others pit you in duels against mechs with power equal to or greater than your own. It’s these levels that really put your skills to the test and force you to consider which weapons are the best ones to get the job done, though they rely a bit too much on just making your enemy zip back and forth across the level to break your lock-on while they fire a steady stream of missiles at you. 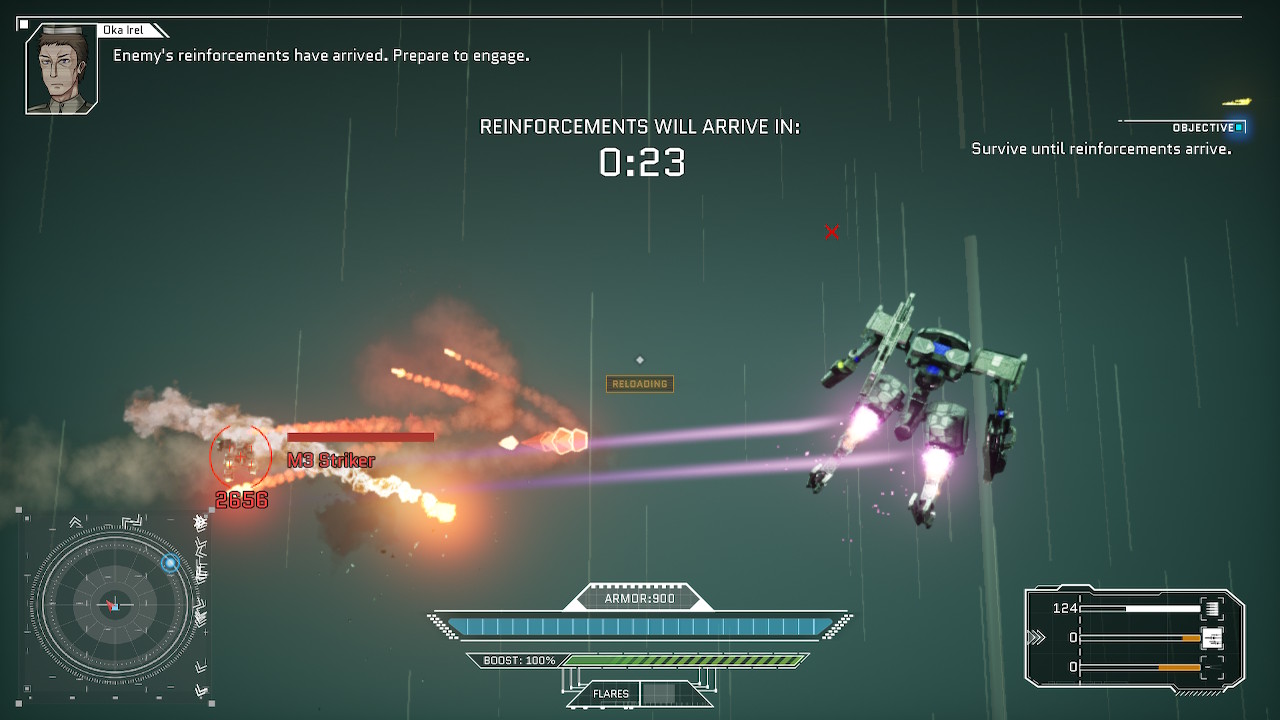 There are a ton of different mechs in the game, each with their own loadout, which helps keep the repetitive structure feeling a little more fresh. You’ll start off in a fairly basic mech, with machine guns, missiles, and decoys, before eventually getting access to powerful long-range weapons, drones, and other futuristic ordinance. You can lump them into a few basic categories, but there are subtleties that set one mech’s weapons apart from another’s and change how you approach levels depending on which cockpit you’re sitting in.

In between levels, and sometimes through dialogue during missions, you’re treated to a corny war story that has a surprising amount of heart, even though it’s not particularly well told. For the game’s first act, I had absolutely no idea what was going on, and intermittently flipped the dialogue language to Japanese so I could just pretend I was watching some bizarre fan-subbed mech anime like the ones I watched as a kid. Eventually, though, I started to absorb the story and found that there was a lot more to it than I expected. You essentially bounce back and forth between controlling both sides of a war for dominance over Earth. It’s a melodramatic story with lots of turns, some predictable and some outright baffling, that goes hard on the tragedy of war. I laughed my way through some of the more on-the-nose moments and strange line deliveries, but it’s more engaging than I expected at the start. 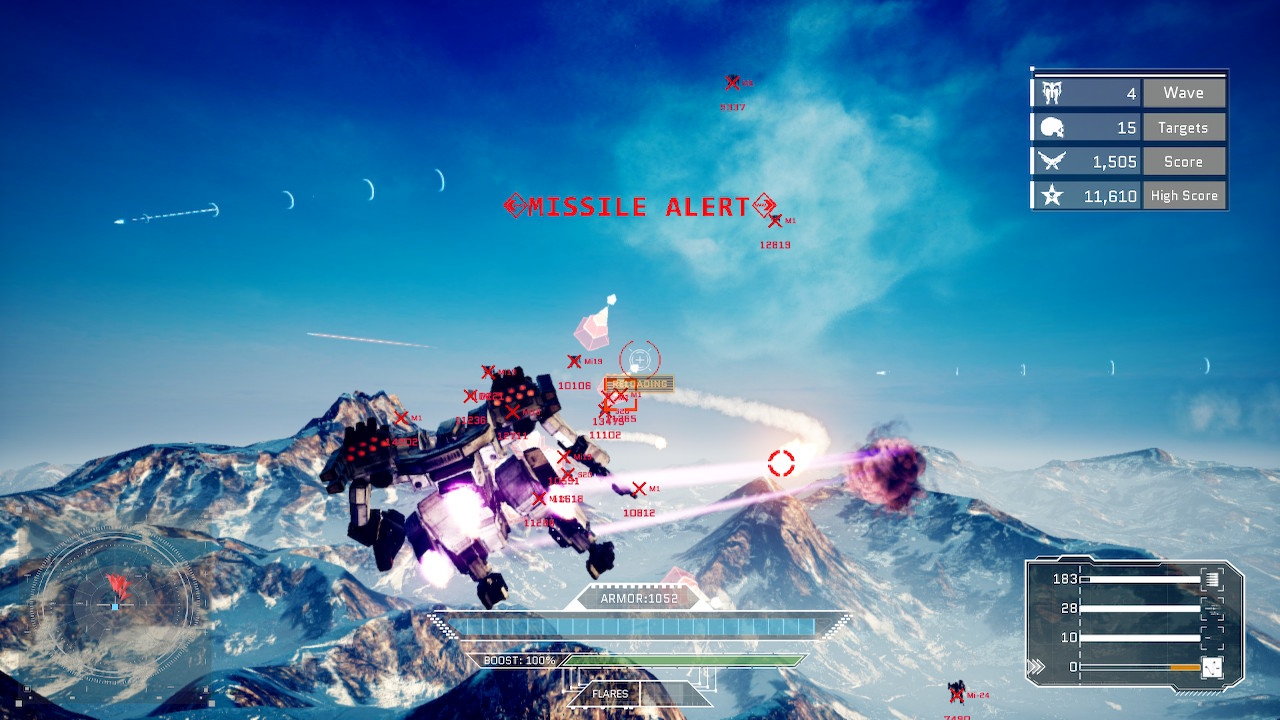 Outside of the campaign, Project Nimbus: Complete Edition also has a survival mode, which sends wave after wave of enemies at you, and Warpath mode, which throws you into different combat scenarios, then rewards you with upgrades as you fight your way through. Warpath has a satisfying RPG-like progression to it, but unfortunately gets a bit boring since you’ll be repeating the same activities over and over. Survival mode is likewise pretty dull, but you can select any mech in the game right from the start, so it’s a good option if you just want to screw around with some of the fun high-level machines.

Project Nimbus: Complete Edition doesn’t break any new ground, and it likely won’t keep you playing for too long, either. But what it does offer is some incredibly fun, fast-paced combat with a varied set of mechs to pilot, and an enjoyable but corny plot like something out of a mid-tier anime.

A committed indoor kid, Bryan moved from Pittsburgh to Los Angeles for a prettier landscape to ignore. They can be lured outside with promises of taco trucks and film festivals, and enjoy trawling through used book stores for works on the occult. Bryan has been gaming since the SNES era and is a sucker for good pixel art.
Related Articles: Project Nimbus: Complete Edition
Share
Tweet
Share
Submit

Cult of the Lamb review — Cuteness, Cullings, and Culty Conversions

NFL Blitz is heading to a home near you courtesy of Arcade1Up, with three games, online play, 49-way joystick, a custom riser, light up marquee, and more

Dolmen review — Another Souls-like adventure, but in space

The Fox Experiment, a new roll-and-write designed by Elizabeth Hargrave and Jeff Fraser, is heading to Kickstarter in September