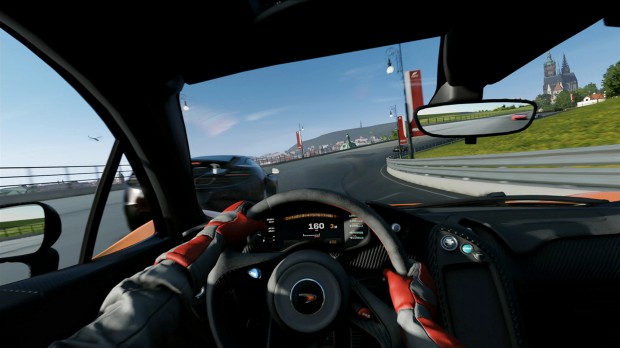 Despite a long history of gradual improvements, the  racing genre doesn’t always reflect the real-world track life: there is one winner, and dozens of losers. Not so on the track – position and rank pay off, and every single car and driver are there to compete, though many aren’t ready to be number one.

Enter Forza Motorsport 5 – some bold changes in a package that is eerily familiar to its predecessor. It’s a step in the right direction, though it manages to stumble a bit in trying to land both a perfect racing experience and a fun-to-play launch title.

We’ve had this game for a while now, and if there is one thing that is resounding is that Forza Motorsport 5 does not compel me to fire it up. I’m more of an arcade-racing guy – I don’t mind the rules of the road, as long as they don’t get in my way. My “drivatar”, or AI avatar with my driving habits which visits other peoples’ games, has been described as kind of a jerk (I’m less than gentle in the turns).

Clean lap? Only if I’m racing solo.
Don’t get me wrong, there is fun to be had, but Turn 10 boldly removed free cars as driver level rewards, and instead provide in-game credits. They found that people wouldn’t spend their earned money on new cars, but instead only use cars they’d won, defeating the purpose of having hundreds of cars available in-game. So as long as you have the cash, you’re able to buy your favorites and never be stuck with a car you’d rather not have.

The problem is, it guts the pull to the next race.  Instead of having a reason to go through a career mode to unlock coveted cars, you can take on any any class right out of the gate with any car you can afford. It looks good on paper, but in effect it gives us an entire sandbox to play in but no mountains to climb. Sure, achievements and trophies for gold cups are nice, but sometimes it feels like you’re supplying your own fun.

On the other hand, I have nothing but praise for the other realignment of the racing genre added to Forza Motorsport 5.   Before, if you came in less than first in most games, that’d be a failure – not so this-go-round.  Turn 10 smartly made holding any position a battle to move forward – you don’t need to get into the top three for the race to even count.  Gold is handed to the first three positions, four through six get silver and bronze goes to seven, eight and nine. Prize payouts are also in line with trophies, and you can expect more payout in experience and money based on the challenge level you select (e.g. harder drivatars, turning off driving assists, and the like).

No scratches, you said!
There were some bugs I’d noticed during the initial release which have since been fixed. One example was that if you turned off in-game music, engine sounds cut out sporadically. Additionally some of the multiplayer race options were sparse – Turn 10 has shown themselves to be willing to improve the experience as the game ages (including adding new race types for multiplayer), though I’d rather it simply been done right out of the gate. For instance, the economic boost adjustment made last month dumps a bunch of credits onto the populace to help people afford both cars and upgrades, effectively devaluing the money earned in-game.  This was a fix to something that, had Forza Motorsport 5 been left off the Xbox One launch list, they could have gotten right initially and not had to disrupt the game’s economy.

Ultimately Forza Motorsport 5 does offer a lot for the price of entry.  Even though I’ve focused on it’s weak points , frankly I’m not prepared to spend a lot of time fawning over the graphical fidelity. In short: the game sounds and looks phenomenal, right down to track details and imperfections in the cars. The orange peel effect on the paint jobs, for instance, helps keep the game in touch with a deeper graphical reality, along with scratches, dings and the wear from tearing up the track. Unfortunately, for all it does offer, there are a few things missing.  The game doesn’t have any sort of weather to speak of, nor do you get nighttime driving.  There is almost always moments where the sun is in your eyes – apparently races don’t ever seem to happen on cloudy days.  Furthermore, there are some odd user interface design choices.  You need to load the next track before being able to back out of career mode, and not having quicker access to changing visual and technical mods for the car you’re using is frustrating.

Nürburgring, where are you?
Forza Motorsport 5 shipped with only 14 tracks and 200 cars, down from it’s predecessors’ 27 tracks and 500 cars. While most of the new and very detailed tracks have different course variants, and there are glaring omissions, there is no denying that this is a true racing engine.  In becoming a better racer it’s important to learn the tracks, and the limited number means that you will ultimately get to know each curve and turn if you’re willing to put the time in.

The career modes are nice to see and were developed with the team from Top Gear America. I’d rather have some interaction with the guys from Top Gear directly, including more outlandish race parameters than the ones included.  It feels like there just isn’t enough of them to inject the irreverent fun that their show offers.  It’s similarly frustrating to see the reduced number of cars and tracks, though Turn 10 is content in churning out pay-to-play DLC content in a game that doesn’t feel quite complete.

I got some multiplayer time in, though I experienced far more timeouts joining games than I expected.  At least my drivatar managed to get out on the Internet – if you log in daily, you’re rewarded with it’s race winnings.  As I mentioned earlier, I’ve also heard back from friends who don’t always appreciate my bumper-car style of racing.  Though I have matured as a racer, I’m grateful that I don’t have to race against my own drivatar.

Forza Motorsport 5 is a technical triumph, offering up incredible achievement in both precision and realistic graphics good enough to show off your new Xbox One. Unfortunately a few baffling design decisions ultimately hold it back from feeling truly next-gen, making Forza Motorsport 5 a good racer, but certainly not built for everyone.

Born and raised in Winnipeg, Canada, at a young age I was forced to decide whether the harsh northern winters were going to claim my fingers, or to turn to the safer pursuits of indoor activities. Little did I know that a little game called Ninja Gaiden would bring my digits more pain than frostbite ever could. Starting with Vectrex and C64 games and moving forward through the era of electronic entertainment, I sampled as much as I could in the different platforms, and began my interest in PC gaming from wrestling with DOS memory management. While console games were a part of my earliest gaming memories and I certainly had played on most platforms including 3D0, all things Nintendo, PS1 and the like, truly the PC was my domain until the Xbox. As an old PC gamer, I ever chased the cutting edge technology. Eye of the beholder with CGA 4 colors was my first step down the the path of blowing thousands of dollars on PC upgrades over two decades. Ultima 7, with the Guardian talking to me through my monitor, still haunts my dreams and keeps me ever hoping for a decent Ultima 8 and 9. From the 3DFX SLI VooDoo2s and Aureal to today's GPU driven DirectX games, the new and shiny pictures seem to keep me going. My PC gaming has slowed down with the market shift though, and although I have choice games that will ever be on PC, I have found myself in console gaming with a bit of portable gaming in my life. Back around the turn of the millenium (and long before fatherhood), I had fired off an email offering to help Ron with a little-known site called ConsoleGold. Little did I know it would be be a part of my life to this day. While I've seen my fair share of shovelware (thanks Ron!), I manage to try and find the fun in most games. Leaning towards sandbox and action titles, I've grown to love games for their potential to reach art. Console agnostic and excited for the progress of tomorrow, I fancy the latest and greatest, but still enjoy the good old classics ... as long as they've been revamped from their 8bit graphic roots.
Related Articles:
Share
Tweet
Share
Submit

Erica Echlin, Jon Miller, and Justin Corbett return to the Marsden Mansion in Zman games Choose your own adventure House of Danger...

When it comes to sodas and energy drinks, I like to try everything. Yeah, I go in knowing things are probably going...

“It is absolutely necessary, for the peace and safety of mankind, that some of earth’s dark, dead corners and unplumbed depths be...

If you had to guess what videocard tops the charts for Steam users, would your answer be the GeForce GTX 1060? Amazingly,...