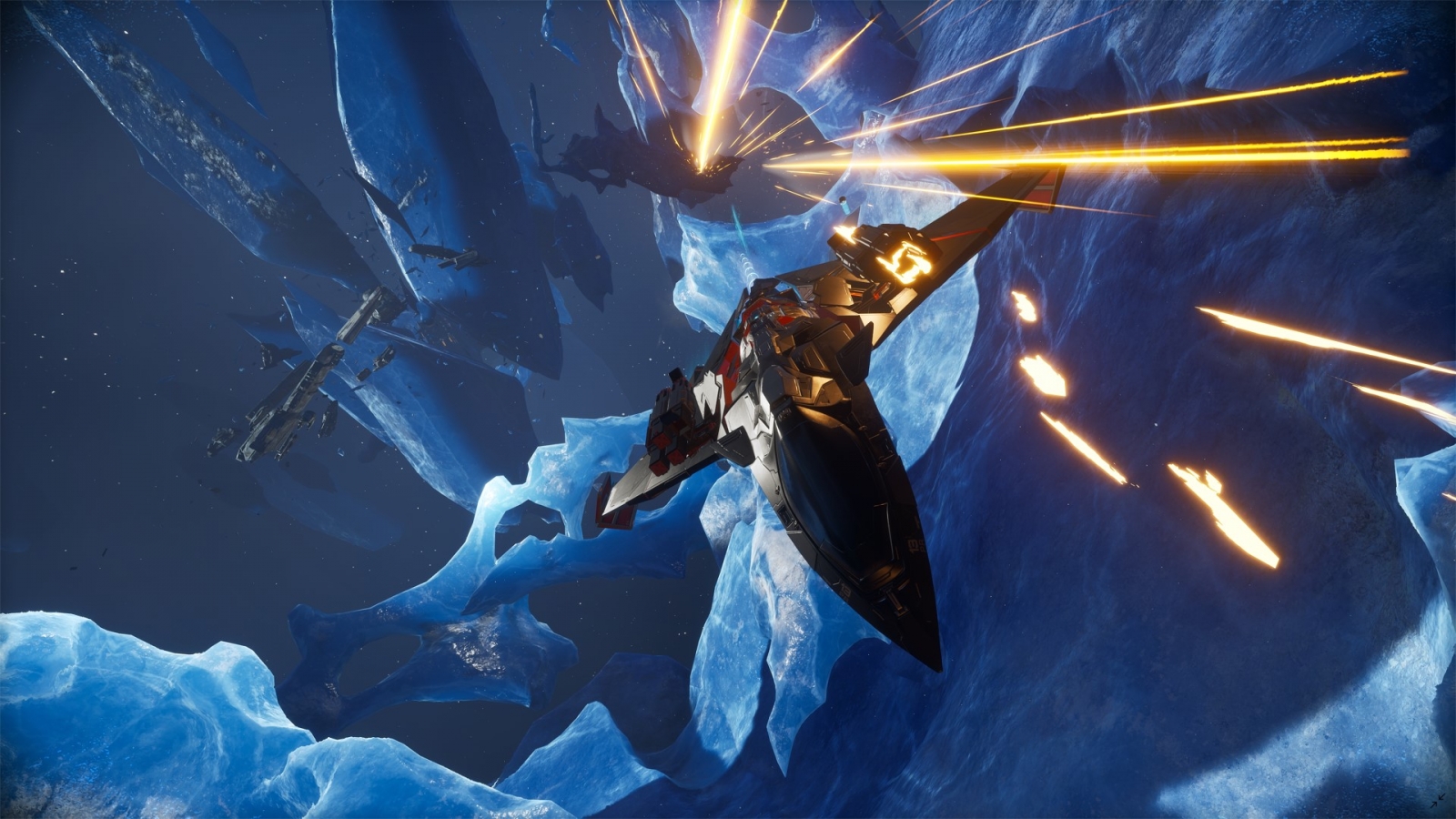 Where do you go when everything you know to be true, down to your very core, has been revealed to be false? How do you reinvent yourself when your belief system and where you fit in the hierarchy of mankind has been shattered? Nara, the protagonist of Chorus, found herself facing these very questions when she was pushed to participate in atrocities against her fellow man on behalf of The Circle. Nara, now an ex-Elder and Commander for The Circle, a quasi-religious group of fanatics bent on “cleansing the galaxy” regardless of cost, must face her inner demons, as well as the repercussions of the things she has done. But has her revelation come too late? Can The Circle be stopped? When Nara left The Circle, she also abandoned her ship — a semi-symbiotic craft named “Forsaken”, or “Forsa” for short. It’s been seven years, and now she finds herself needing to go back to retrieve him one last time.

There’s plenty to do in Chorus. There is a critical path of story-based missions, but the side missions feel equally as fleshed out. Honestly, this is a game where you’ll want to consume every single bit of it, so the side missions feel part of the package. There are a handful of mission types, and you’ll even pop out of Forsaken every once in a while to pilot another craft, so Chorus doesn’t feel stale at any point. There are multiple areas to explore, and dozens of side missions in addition to the central thread. It’s all well voice-acted and compelling, though many do boil down to combat or the occasional puzzle. A few twists and turns to keep you interested, but it’s the combat that’s going to hook you hard.

With absolutely zero hyperbole, the combat in Chorus is the best I’ve seen in any high-speed arcade-style ship combat game. Not among the best — the best. It’s the most hectic scenes of Battlestar Galactica, the trench runs of Star Wars, and all the awesome space game cutscenes that never translated to gameplay…until now.

If there’s a central core element of Chorus that hooks you most it’s the concept of drift. Before we get into that, however, let’s talk about upgrades. Your ship upgrades are tied to four core systems and three modification slots. Using an MMO-style common, uncommon, rare, unique, legendary type system, you’ll collect various items that can improve your weapon DPS, how fast energy recharges, improve your hull and shields, help with aiming, and other various functions. These can often come with a marking that indicates a “set” bonus, should you collect and equip enough of them. For example, the Viper set will grant the “Backstabber” power which hits damage for 50% more damage when you teleport in behind them. The Exalted grants additional segments to be used with your special “Rites” powers. It serves its purpose, though I have to say that I never went out of my way to collect anything special — the dogfighting is no more or less engaging with an additional 7% energy. Still — it makes the ship feel more personalized, and that counts for something. The real powers, however, come from the aforementioned Rites.

Rites are Nara’s powers that come from her being the Circle’s super-soldier. When she left the Circle, she “burned” them, so you’ll have to recover those rites. The first comes fairly quickly — the Rite of Senses. This Rite lets you send out a pulse to see points of interest around her, marking them on the star map. You’ll use this constantly to find things to give you credits to spend at the store, or for mission objectives.

The second rite is FAR more interesting and honestly is the key to the entire dazzling-beautiful ballet of death Nara and her ship Forsake can perform. I’m talking about the “Drift Trance”. The drift trance lets Nara and Forsaken enter into a trance together, melding ship and pilot into one. In practice, it slides open Forsaken’s wings, holding them aloft with a web of energy, allowing the ship to slide in whatever direction momentum was carrying him. This makes the high-speed flip, turn, burn, and destroy maneuver we’ve only seen in the very best of Sci-Fi movies possible, and it is absolutely glorious. Whipping around corners at reckless speeds, only to slide sideways and strafe enemy ships is thrilling and easily one of my favorite parts of the game. That is, until you combine it with the third Rite — the Rite of the Hunt.

The Rite of the Hunt lets Nara and Forsa teleport behind enemy ships in the blink of an eye, moving them into perfect position to absolutely rain hell on her foes. It makes the pair an absolute terror of the skies as no enemy can ever be fast enough when their prey can simply whip around with Drift Trance, and then vanish into thin air only to reappear behind them.

There are three more Rites to discover, and each are force multipliers in the field. As your foes get tougher and more resilient, you’ll need them, but as they are directly linked to the storyline, I won’t ruin them here. 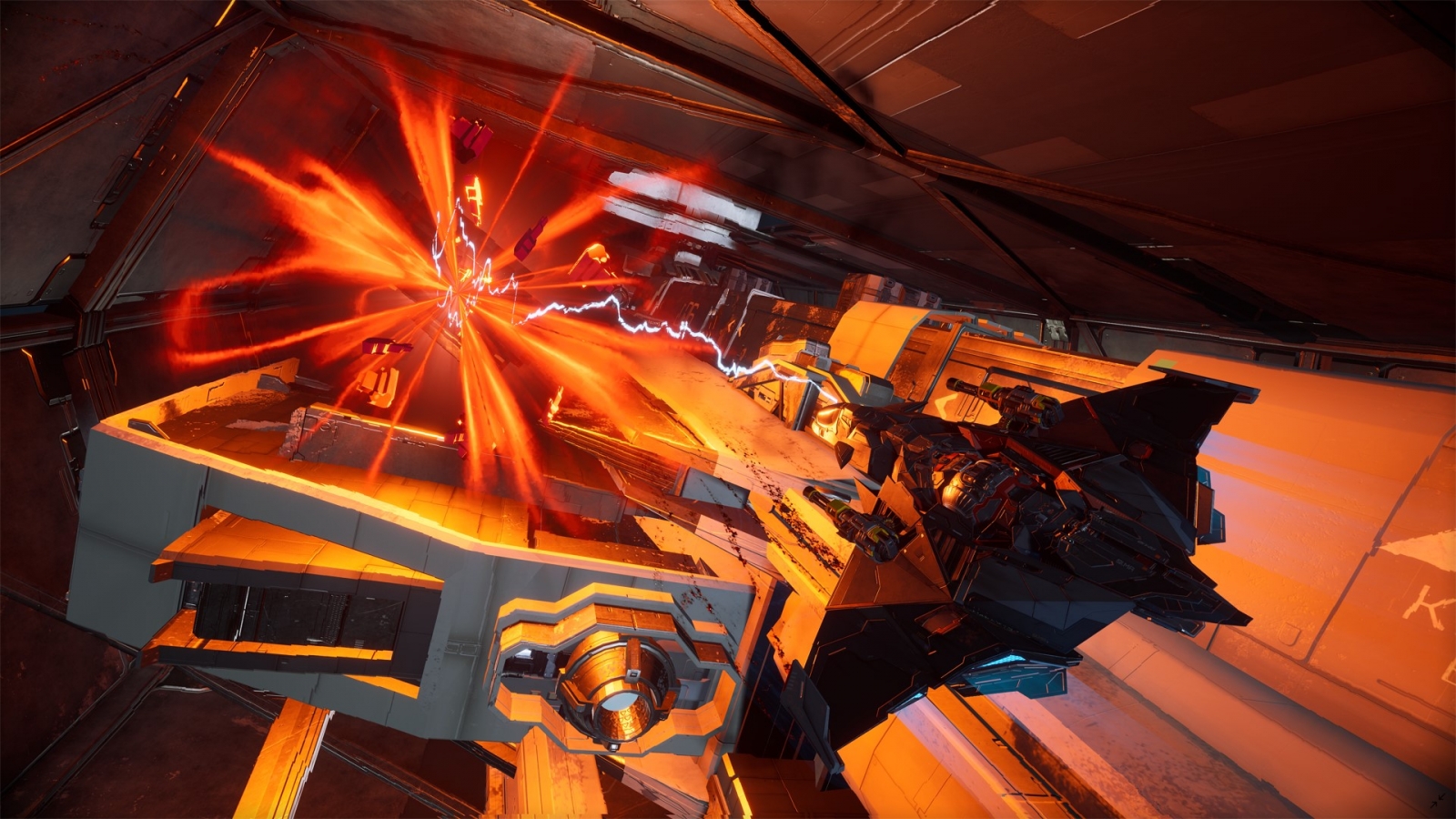 While the weapons upgrades and amazing powers are cool, it’s not the only way you’ll power up. Simply doing what you do best, and playing however you want to play, you’ll earn mastery. For instance, destroying a certain amount of foes with a gatling gun will reduce your weapon heat generation. Continue to do so and it reduces it further, until you hit the fifth level when the cooling capability is a full 20% reduction. Similarly, using your Hunter Rite and killing a foe seconds after teleporting behind them will allow you to leap further using this power, making it all the more devastating. Frankly, I had more fun maxing these out than hunting for weapons at various hangers in the game.

Unfortunately I did run into a handful of immersion-breaking hiccups that immediately pulled me out of the experience. There are a few moments in the game where it gives you a new power, or asks you to perform a specific thing, and then fails you less than 5 seconds later for not instantly understanding the new mechanic. During one sequence, I’d learned a new power and was chasing another Elder. I was asked to not let her out of my sight, disrupting her engines before she could jump. 12, 13, 14, 15 attempts. It says “Press X to disrupt her engines”. As I hammer the X relentlessly, press it rhythmically, and otherwise wear the paint off the X button on my controller I fail over and over and over. 18 seconds, same voice lines, again and again. Do I fly through the purple clouds? Why won’t my ship fly any faster? How do I activate my power? Am I supposed to charge it? It looks like I’ve got two pips, but is that enough? “Target is escaping” blinks on my screen ad infinitum, but the game isn’t giving me any help here. Out of frustration, and after 30 minutes of the same Groundhog Day 18 second loop more times than I’d care to count, I unplug the controller and fly with mouse and keyboard. Yep — all this is a bug, and my ship flies like it should. I easily shut down the other ship and proceed on with the mission, but the damage is done at that point. Bugs like this are thankfully infrequent, but not entirely absent.

Another instance came as a part of Nara’s sense ability. The game informs me that I press the A button to scan the area. Pressing the A button for a moment sends out a long-range pulse which highlights objects and areas of interest. While trying to find objects in the environment, I’d long press to try to highlight them all, and with wildly inconsistent results. Sometimes it’d mark things with a triangle for me to hone in, and other times it wouldn’t. Well…it turns out there’s a difference between a short tap and a long press. Maybe I missed it, but I don’t recall the game telling me this. Once I’d figured this mechanic out for myself I was able to easily spot targets and items in the environment, but when coupled with the handful of bugs I encountered it makes you constantly wonder “Should I keep trying? Do I just suck? Or is this a bug?” — an immersion-breaking feeling if there ever was one.

Chorus is absolutely beautiful. With gorgeous lighting and horizons that seem to stretch on forever, the world that Deep Silver Fishlabs has created is a sight to behold. While Nara stays in Forsa’s cockpit for the vast majority of the game, those moments where she steps out are fantastic. Raytraced lighting is everywhere, adding some amazing lighting and detail when you find yourself whipping in between the superstructure of a massive space station, or hurtling through a debris field at breakneck speeds. This game is a graphical showcase.

Despite any hiccups in the game, there’s one feeling I couldn’t shake — the need to keep playing. Chorus is pure addiction. I will close out every quest, I will complete every story, I will find every hidden goody — it’s that good.

With incredible combat, a solid story and voice acting, and gorgeous graphics from top to bottom, the handful of bugs in Chorus can’t hold it back. Come for the story, and stay for the high-speed power drift as you unleash your vengeance.

Ron Burke is the Editor in Chief for Gaming Trend. Currently living in Fort Worth, Texas, Ron is an old-school gamer who enjoys CRPGs, action/adventure, platformers, music games, and has recently gotten into tabletop gaming. Ron is also a fourth degree black belt, with a Master's rank in Matsumura Seito Shōrin-ryū, Moo Duk Kwan Tang Soo Do, Universal Tang Soo Do Alliance, and International Tang Soo Do Federation. He also holds ranks in several other styles in his search to be a well-rounded fighter. Ron has been married to Gaming Trend Editor, Laura Burke, for 21 years. They have three dogs - Pazuzu (Irish Terrier), Atë, and Calliope (both Australian Kelpie/Pit Bull mixes).
Related Articles: Chorus, Indies
Share
Tweet
Share
Submit