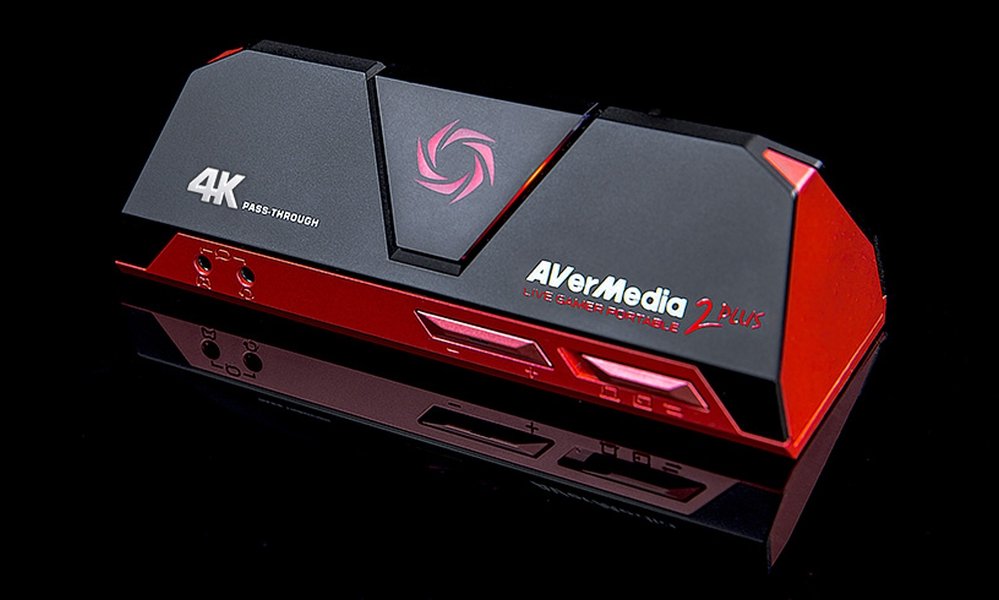 Capture rigs are a big part of what we do here at Gaming Trend, and with YouTube, Twitch, and other services, it can be your opportunity to break into the world of streaming your favorite games. I’ve recently gotten my hands on the AVerMedia Live Gamer Portable Plus 2 – the latest in a long line of excellent capture rigs from AVerMedia. This newest unit from the company looks to bring some new fresh features to the field, so I was excited to dig in and see if this newest rig could be my new portable for conventions and travel.

Aesthetically, the team at AverMedia has made something that looks as amazing as it performs. The triangle shape and red/black color scheme looks like it belongs attached to the kinds of PC you’d see on a professional PC building subreddit. Inside the box, underneath the device, are three cables – a short HDMI, a lengthy braided micro-USB, and a long 3.5mm audio cable. With those items, and a microSD card, you have everything you need to capture video from any console or PC game.

RECentral is the streaming and recording software that the AverMedia Live 2 uses to capture when connected to a PC, but this device operates without a PC as well. Thanks to a physical toggle, the device can grab footage at 1080p and 60fps without missing a beat, and without the need to connect it to a PC or laptop. This is incredibly handy when you want to snap video without having to lug an extra eight pounds of laptop hardware.

The headless capture with 4K passthrough is a real advantage for the 2 Plus.

“But Ron”, you say, “why do I need this device? I can hit the Share button on the PS4 or the Xbox button on the Xbox One and capture video”. While that’s true, there are plenty of devices that don’t support that, and there are plenty of moments where the hardware is in control of your content, not the other way around. As an example, while playing Knack 2, the game would frequently pop up an incorrectly spelled notice saying “Gameplay Recording Paused Because You Have Entered a Blocked Scene” when I picked up any of the random loot from hidden boxes. I don’t know why this content is blocked, but when I’m trying to capture and demonstrate features for readers, it’s a hindrance to my review. Similarly, if you wanted to share the moment you got a particularly awesome piece of gear, you can’t – Sony said so. Why? Because, reasons. With the AverMedia Plus 2, I get to capture what I want, when I want.

The second reason this device is a great step up from the in-device options is the length of capture. The PlayStation 4 is capable of capturing the last hour of footage, but that’s the max selectable length for a video for the system. The Xbox One has a rolling “DVR-like” capture system that can hold up to 30 minutes of footage, always recording in the background. This is, again, suboptimal as it means that, in both cases, you have to manage the process lest you miss something awesome. The Nintendo Switch, on the other hand, has absolutely zero capability to do capture, with screenshots the only option within the console itself. Nintendo was pretty far behind the online curve, and they are equally as behind on sharing with the community. The AverMedia Plus 2 is capable of recording for as long as you have hard drive or microSD card space. How long is that? That’s a question of codecs.

The 2 Plus comes with all the cables you need. Just add microSD.

Codecs are the encoding algorithm that attempts to strike a balance between the raw output and a more reasonable, but compressed, version that can be used for things like YouTube. Naturally, AVerMedia selected H.264 as their codec – easily the most clean and compatible of the choices, and the best format for uploading to YouTube or streaming to services like Twitch and Mixer. The codec, however, only tells half the story.

With every other capture rig (other than a few specialized PCI card-based exceptions) on the market, you’ll need to disconnect it to play at 4K. When you want to capture, you’ll need to drop your resolution down to 1080p and reconnect everything. It’s a hassle, forcing people like me to buy clunky splitters that may or may not introduce lag, artifacting, and other issues. The AVerMedia Plus 2, on the other hand, provides 4K pass through. This means that the Plus 2 can push that delicious 4K video at 60 frames to your screen while downscaling and capturing at 1080p and 60 frames with zero impact to what’s happening on your screen, or the resultant stream or stored file. With the Xbox One X and PlayStation 4 Plus supporting 4K gameplay, not having to fiddle with cords behind my console is a huge benefit.

Beyond encoding video, the AVerMedia is also capable of capturing console party chat, and headset commentary. Better still, it does this with two separate 3.5mm inputs, so a content creator is free to pick and choose which, if any, commentary they’d like to capture. This is handy if you want to narrate your own match without pulling in all of the chatter from other players. Better still, the Plus 2 also has a hardware rocker switch for volume, so there’s no need to fire up the software to make these adjustments.

Discreet ports for capturing only what you want.

If you are keen to use the Plus 2 via your PC, you’ll want to download the free software offered by AVerMedia – RECapture 4.0. The RECapture system supports live editing of your videos, and there are some pretty slick tricks for people who want to save their videos, or streamers. Other than adding a secondary video source like a camera, you can also add a website loaded in a corner, text, a secondary desktop capture, or even a secondary video stream. In fact, you can see in the image below that I’m running a picture of myself from my camera, as well as a running video capture of Forza Motorsports 7, a picture of the AVerMedia Live Gamer Portable Plus 2 capture rig, and a watermark that I could put anywhere I want. In fact, many of the tools and tricks I normally use to produce video are simply baked into the software. With enough setup, you can build out your stream to look exactly like a fully post-produced video, and that’s rare for packed-in software.

A quick and dirty demo of the sort of thing the 2 Plus can do on the fly.

If post-production is your jam, the video that is captured is in .mp4 format, whether Plus 2 is in PC mode, Storage, or PC-Free mode. You can read the microSD without needing to remove it with the included USB cable, so this puts the AVerMedia product a notch above the removable USB stick contemporaries.

With all the praises for the device, I did have a minor issue with the RECapture software. After I completed a capture, I would routinely have issues getting the software to maximize again. Instead, it would hiccup out a message that says “RECentral 4 application is already exist” as you can see below, and was unwilling to rejoin the party until I force-closed it and restarted the application. Thankfully, all of the videos were present and accounted for when I restarted the application, but that stability issue does need a patch. If you are the type that uses After Effects, or other post-production tools, you can safely ignore RECentral’s patchable shortcomings.

If there’s one thing I wish the Plus 2 would do, it’s capture in 4K. That said, a 4K capture system (The AV.io, as an example) can easily run you $500, whereas the price on the Plus 2 is just a fraction at $169 (Amazon link to buy it here). That said, the Plus 2 doesn’t support HDR in its capture, so there are tradeoffs.

The AVerMedia Live Gamer Portable Plus 2 is simplicity itself. Capturing with or without a PC is as simple as connecting the cables and pressing the big button on top. There are some software stability wobbles, and the results won’t have HDR support, but at the price point there’s nothing out there that can beat it. With 4K passthrough, the Plus 2 is the best capture rig for next-gen platforms - period.

Ron Burke is the Editor in Chief for Gaming Trend. Currently living in Fort Worth, Texas, Ron is an old-school gamer who enjoys CRPGs, action/adventure, platformers, music games, and has recently gotten into tabletop gaming. Ron is also a fourth degree black belt, with a Master's rank in Matsumura Seito Shōrin-ryū, Moo Duk Kwan Tang Soo Do, Universal Tang Soo Do Alliance, and International Tang Soo Do Federation. He also holds ranks in several other styles in his search to be a well-rounded fighter. Ron has been married to Gaming Trend Editor, Laura Burke, for 21 years. They have three dogs - Pazuzu (Irish Terrier), Atë, and Calliope (both Australian Kelpie/Pit Bull mixes).
Related Articles: AVerMedia Live Gamer Portable Plus 2, Hardware
Share
Tweet
Share
Submit