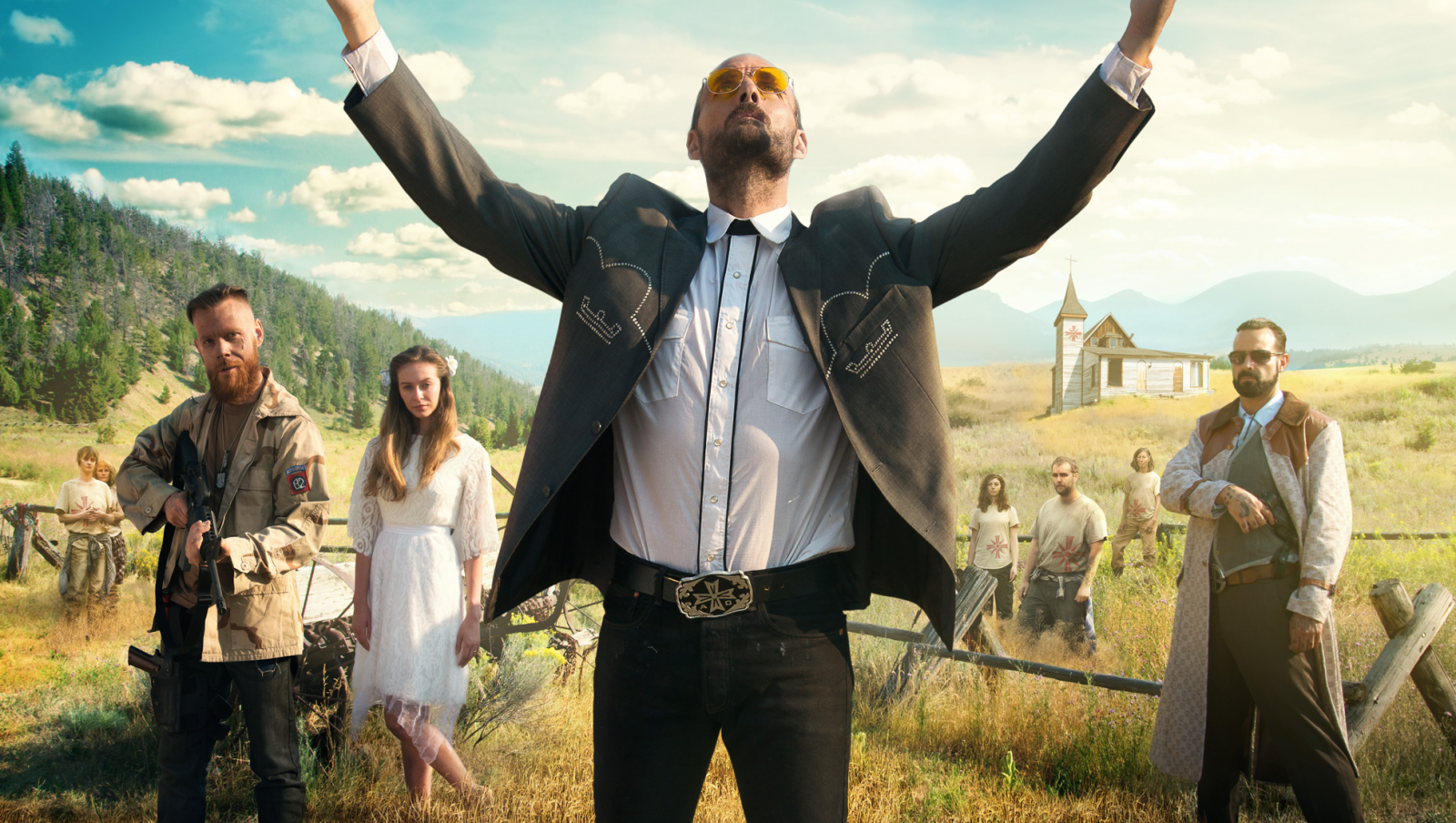 At a recent event to check out the upcoming open world adventure Far Cry 5, we got to check out an awesome short movie that serves as a backstory lead-in for the game. In it, a group of 20-somethings led by a man named Alex is driving an SUV to Montana to vlog about a shady cult they’ve heard about. They’ve received a letter from a man named Mark in a place called Hope County who says that his sister has been abducted. It all sounds like the sort of thing nosy vloggers should chase down, and what could possibly go wrong?

The group rolls into the sleepy little town and meets up with Mark at a local watering hole. After admitting that his sister actually left of her own free will, Mark lays out that a group called Eden’s Gate, led by a man named Joseph Seed, is essentially brainwashing people. The vloggers get it in their heads that it’d be a great idea to crash a sermon with a hidden camera to expose the truth.

As the crew enters a well-defended tent (complete with local militia swarming the area) they come face-to-face with Joseph Seed, whom the group refer to as “The Father”. His charisma is immediately undeniable, enthralling everyone with his speech, mannerisms, and message. He mesmerizes his followers as he describes how greed, war, and starvation are enveloping the world as people have turned away from God. He continues that there is hate brewing, and it is making the world feel unsafe. He then insists that there will be a reckoning, and suffering, but people can choose a better path – love and acceptance. Spreading his arms wide, he proclaims, “Join us and you will find your peace. I am your father, and you are my children. And together we will march to Eden’s Gate.”

The Father proselytizes to his people.

Exiting the tent and noticing the number of armed militia members, the team decides that maybe this isn’t the right place to confront The Father to try and recover Mark’s sister. Instead, the group tails the cult on foot through the woods, where they witness a forced baptism in the river with some sort of blue chemical chaser. This drug, nicknamed “The Bliss”, completely pacifies the previously struggling girl. Evidence in hand, naturally this is when the familiar “click” of a 9mm pistol hammer alerts the group that they’ve been caught. Forcing him into the water at gunpoint, the cult pours the same blue chemical into the water and baptizes Mark, his passive mind immediately accepting his indoctrination into Eden’s Gate. With outstretched hand, Father explains that he has “broken the hold of screens and greed” on Mark.

Captured, the crew is carted back to a church where dead-eyed supplicants await, welcoming the Seed family with open arms. A slender flower child (Faith Seed – The Father’s sister) steps up and assesses the captured group and whispers her thoughts to Father, who “invites” one of the crew (a woman named Sarah) down for a “friendly interview”, binding the rest of the group to posts in a nearby barn.

It’s here that I feel that actor Greg Bryk (look for our interview with him in the next few days) earns his paycheck. In a soft and compelling voice, he explains to Sarah that he was once put in a group home, how difficult a time that was being separated from his brothers and sister, how he was abused and ill-treated. He continues that it was in this pain and tribulation that he found God’s voice, and that God had chosen him, using this crucible to harden his faith. Assuring her that she is now safe – safe from sin, safe from the impending collapse, and closer to salvation, he pours her a cup of tea that Faith has clearly spiked with The Bliss. As he promises that he will never abandon her, she drinks it down.

Alex and the remainder of the group manage to slip their ropes in the nearby barn. Seizing a phone from one of the incapacitated guards, they make their way into an adjacent shed, finding a bat, an AR-15, and a crossbow. Armed, they plan to sneak into the church and save Sarah from The Father and his Eden’s Gate followers. As they sneak between parked cars on their approach, their stealth is compromised by a patrolling follower. The ensuing firefight is going well until The Father, joined by his brothers John and Jacob, joins the fray. Fleeing, the group is flanked by followers. One by one, they are captured or shot down.

The Father is embraced by his disciples.

Alex, his camera still running, manages to get a signal on the stolen cell phone, begins to finally upload the shocking footage of all that has transpired. Success on the horizon, Alex is shot in the back and begins to feebly crawl away. The Father reaches him, telling him to “surrender to God’s will.” Defiant to the end, Alex finishes his footage upload before being dragged away. It’s this footage that leads into the game, as in Far Cry 5, you’ll play a Jr. Deputy who will serve the arrest warrant on The Father. It’s a hell of a first day, and this video is a fantastic way to kick it all off.

If you have Amazon Prime, this is a high-quality lead-in for the upcoming game.

I’ve given you the best description of this fantastic lead-in video through my mind’s eye, but you’ll soon be able to experience it for yourself. The video, produced by Asylum Entertainment and entitled “Inside Eden’s Gate”, will go live exclusively on Amazon Prime on March 5th.

Look for our extensive hands-on footage, including two interviews, cooperative play, and the adventures of a massive grizzly bear named Cheezburger, when all of that coverage goes live tomorrow, March 2nd at 7 a.m. PST.