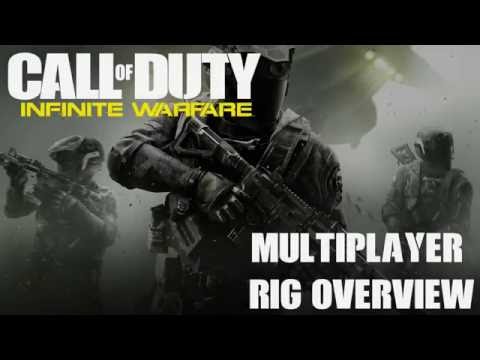 I hear it from my friends every year. “Another November, another Call of Duty” — clearly fans are feeling a bit of fatigue for the franchise. Last year we saw a glimmer of what Activision and Treyarch had in store for us to break that cycle with Call of Duty: Black Ops III. Justin Pauls gave it a rare 100%, calling out evolution in combat, how movement and graphical fidelity built a whole new level of immersion, and praised it highly for surprises around every corner.

This weekend was the the 2016 Call of Duty XP event. First held in 2011 to kick off Call of Duty: Modern Warfare 3, it also served as a platform for the world’s best to square off for a million dollar cash prize. This time around, the stakes are higher with two million dollars on the line, and Call of Duty: Infinite Warfare the weapon of choice.

Call of Duty: Infinite Warfare spells a large departure for the series. Slipping the surly bonds of Earth, Infinite Warfare takes place in a bleak and distant future. The Earth has been mined of all of its precious resources in response, the United Nations Space Alliance (UNSA) is formed with the goal of reaching for the stars to establish new mining colonies to sustain humanity. Naturally, this doesn’t go according to plan as a hostile faction called the Settlement Defense Front (SDF) rises to power and attempts to seize control of these precious resources. In Infinite Warfare, players will step into the boots of Captain Nick Reyes (voiced by Bryan Bloom), commander of the UNSA Warship Retribution. Their mission is to halt the incursion of the SDF, expelling them from their already-successful siege.

Future War, Future Tech
After the success of Black Ops III, the team at Infinity Ward kept some of the game’s strongest qualities, using class-based multiplayer to serve as archetype bases for players to iterate and customize against. Out of the six available at launch, three of these so-called “Rigs” were revealed at the event — the Warfighter, Merc, and FTL.

The Warfighter is focused heavily on support, using the Claw Payload to fire ricocheting bullets en masse, pressing the attack with firepower and speed. The Warfighter also has a Trait that prevents kill streaks from resetting on death, but requires larger point values to attain.

The Merc does the heavy lifting from the Rigs we know so far. Sporting the Bullcharge payload, the Merc can charge through enemies with a vengeance, breaking defensive lines and creating chaos. Their Infusion trait supports this reckless approach, granting additional health regeneration when damage is taken.

Finally, the FTL Rig is your stealth assassin. Able to cloak and move, the FTL also has the Eraser payload — a pistol capable of incinerating enemies on the spot. Combined with the Powerslide trait, the FTL Rig is capable of sliding through enemies like a hot knife through butter using extended sliding-while-firing capabilities.

Guns, guns, guns!
For the first time in franchise history, players will be able to craft their base weapons into prototype versions with additional capabilities. With four rarity levels available, each weapon sports special perks capable of giving players an additional edge in the field. For example, you have the EBR-800 — a hybrid sniper rifle that comes native with the Stockpile perk. The next tier up has Jackpot, giving an additional 10% bonus score for all kills. Bumping to the top, the Epic version is called the Osiris. The Osiris highlights players who are already low on health with a thin red line, encouraging players to feed the weapon with easy kills. Crafting is accomplished by collecting “salvage”- crafting materials collected by simply playing the game. The crafting system will extend into secondary weapons as well, giving players all-new ways to customize their weapons to their playstyle.

Maps, maps, maps!
The team at Infinity Ward has been hard at work creating maps to sate the ever-present demand for fresh content from fans. This time around, there’s something beyond the usual fare of balanced playgrounds — the team is taking us to space. For the first time in the franchise, there will be Call of Duty maps that take place off-planet. In addition to the space station map revealed earlier, we saw players stepping onto an alien landscape during a brief trailer shown at CODXP. During this same trailer we saw smash-cuts of Mars and Jupiter, so it’s likely that this map could take place on the surface of either of those planets.

Everything I’ve seen of the game so far seems to adhere to the invariably high standards for which Infinity Ward has become famous. There’s a lot of classic design at work, but the momentum, wall-running, and verticality has gotten a good shot in the arm. Watching the pros wandering around this event, I spotted one player leap through a second story window, flip around and shoot a pursuing player in the head, spin back around, and then flick a knife in between the eyes of a player on the ground level. In my own experience, I managed to do a little bit of ballistic ballet myself, which speaks volumes to the accessibility of the momentum engine.

A few new modes for the mix.
It wouldn’t be Call of Duty without new game modes. While the team wasn’t ready to reveal everything, we did see some familiar modes such as Team Deathmatch, Frontline, Kill Confirmed, Domination, Hardpoint, and Search and Destroy. The team did reveal a new mode entitled Defender. In this mode, players collect a drone and attempt to hold it for as long as they can. As they do so, points tick up until it hits a specified point and then the drone resets.

In practice, I felt like Defender combined the best parts of Capture the Flag and Domination style gameplay and merged it into a single mode. Clearly I was having an off day as I couldn’t string together two kills to save my life, but that didn’t stop this new mode from being a hell of a lot of fun.

What about the people who don’t play online?
If multiplayer isn’t your thing, you might be happy to hear that Infinite Warfare will push player agency and freedom of movement to all new levels in the campaign. Infinity Ward Narrative Director Taylor Kurosaki revealed that this new title will feature “no breaks in the action, and no loading screens”, demonstrating this with a small slice of the campaign mode.

The first example of this newfound player freedom came courtesy of the Jackal. A small dropship spawned from the Retribution, this ship will give players dogfighting in space with full freedom of movement. The video continues, showing off what looked like an assault on another capital ship. Closing out the brief sequence, we saw the Jackal approach the Retribution, locking in the landing lane to be intercepted by a landing drone. It’s a pretty big departure for the series, and looks years ahead of the on-rails helicopter sequences we’ve seen in games past. I’m crossing my fingers that this mode isn’t a brief interlude.

Building worlds for the future
It’s long been my belief that creating videogames is about world building. To that end, I was awestruck by how complete a world Infinity Ward has built here. The dropship descent from the Retribution to the planet below reminded me of James Cameron’s Aliens, but on steroids. Flashing forward to another slice of gameplay, we saw mechanized soldiers, tanks, and more future tech. The world Infinity Ward is creating feels more hard science fiction than just a futuristic ‘skin’. That said, it’s still as bombastic as you might imagine, an example best demonstrated as the player yanks a missile off of a giant robot, jams it in his back, and then kicks backwards to shoot the missile with pistols akimbo.

If there was a particular panel from this event that summed all of this world building nicely, it’d be the talk that discussed how developer Infiinty Ward worked directly with NASA and JPL to bring Infinite Warfare to life. The team worked tirelessly to blend function, form, concept, and hard science to create a world that was futuristic but still believable. Using references from NASA, the team worked with several prominent sci-fi concept artists to build the pressure suits, attack craft, and capital ships for Infinite Warfare’s setting. Don’t take my word for it, though — you can hear the entire panel here:

I came away impressed with what Infinity Ward and Activision has in store for us this year. The gameplay feels smooth, the audio is more on point than ever, and the sci-fi setting brings an entirely new flavor to the series. If you feel like you’ve got a bit of Call of Duty fatigue, Infinite Warfare could spell a new renaissance for the series.

Arcade1Up announces their first at-home casino game, Wheel of Fortune, along with a portable Infinity game board & more